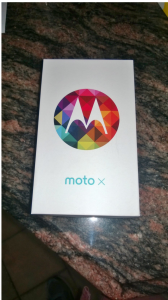 I can't get these words out of my head. I've been repeating them over and over. No, I am not going crazy (I hope), I have been using Motorola's newest flagship Android device, the Moto X -- "OK Google Now". This device focuses heavily on voice interaction -- particularly with those words that have found a home in my brain.

There was a lot of hype and buzz leading up to the big unveiling of this device. The closest comparison from a hype perspective is the original iPhone. My colleague Joe Wilcox recently released a book, titled "This Book is not a Kindle Single (The Rejected Essay)", which makes mention of the Moto X in comparison to the iPhone as seen in the below excerpt.

"The original iPhone is a stunning achievement in the annals of technology, mainly because of its responsive, human-like qualities. Nokia popularized the smartphone with release of the 9000 in 1996, yet the category remained relatively small until Apple launched iPhone in June 2007. The iPhone fundamentally changed the paradigm, making the touchscreen the primary user interface. Touchless interaction, Moto X’s most compelling benefit, is the most disruptive change in computing and consumer electronics since the original iPhone popularized touch. Touchless interaction will be integral to future tech designs, everything from phones to cars to refrigerators—like asking for the day’s weather when getting milk for the morning coffee".

Joe is absolutely right. Where the iPhone innovated with touch, Motorola is trying to match it with voice.

Here are the specs of my Moto X: 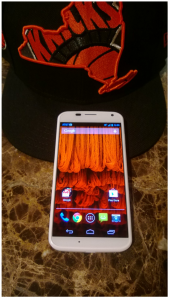 Upon taking the device out of the small box, I was immediately taken aback by the good-looks of the device -- it is art. My particular Moto X, on AT&T Wireless, is all white. However, AT&T customers can opt for a customized color palette for the smartphone by using Motorola's Moto Maker. While I think this color customization will prove popular with some, an all-white smartphone is classy and mature.

Holding the device is something that words cannot do justice -- it must be held to be appreciated. The screen is 4.7-inches, but because of the well-designed nature of the chassis, it feels smaller. In fact, I can confidently say that this is the best large-screen device for one-handed use. Not only is the back of the device curved downward, but it slightly tapers off towards the edges, leaving a magic-like grip in the hand.

Turning on the device revealed one of the best boot-screens on an Android device. It opens with a picture of a blue Motorola logo which ultimately transforms into an animated Earth. It is fun and pretty; not dark and tacky like the boot-screens on Verizon's Droid (Droiiiiiid) line.

Once booted, I went through the setup process; something I did recently with the Samsung Galaxy Tab 3 8.0. As expected, by signing into my Google account, all of my apps were downloaded and installed -- a super feature that never stops impressing. In addition to my apps, all of my emails and Google+ account were ready to go.

However, the big selling feature is the voice integration. You see, the Moto X has a CPU core dedicated just to listening for when you say "OK Google Now" -- the magic words to waking it up. I tend to fall into the conspiracy-theorist camp when it comes to security and voice monitoring. However, this feature is opt-in, which I appreciate and for which I applaud Motorola. Once opted in, I decided to test the voice integration as seen in the below video from my bathroom:

As you can see, it works flawlessly and I came away impressed. However, another unique feature is the screwdriver motion which launches the camera. This works even with the screen off as seen in the below video:

Again, flawless operation which will prove useful. A cherished and precious memory can be lost forever if you can't pull out your phone and take a picture fast enough. While other manufacturers (Samsung) bake gimmicky features into their devices, Motorola focuses on true value.

Another important feature is the notification screen. With the screen off, just by picking the phone up off of your desk or pulling it from your pocket, a clock will appear along with any missed notifications. You can then take a peek at the notification without turning the entire screen on. This is a brilliant feature that should save battery life and time.

Sadly, the device does not support Qi wireless charging. I tried placing it on my Nokia DT-900 and nothing happened. This is unfortunate as my Nokia Lumia 928 and current-generation Nexus 7 both support this feature. In my experience, the plugging and unplugging of a microUSB cable can cause the port to get damaged or even fail. As a flagship device, Motorola's choice to not include wireless charging is very unfortunate.

Overall, this is the best Android smartphone on the market today. Yes, there may be smartphones with better specs that score better benchmarks. However, quite frankly, who cares? Something funny happened while using the Moto X -- I stopped focusing on performance and started focusing on experience. Yes, the experience is the killer feature of the smartphone. The lines have been blurred. No, not Robin Thicke; the lines that have been blurred are the ones between the user and device. The Moto X will improve your life while simultaneously changing the way you interact with technology.