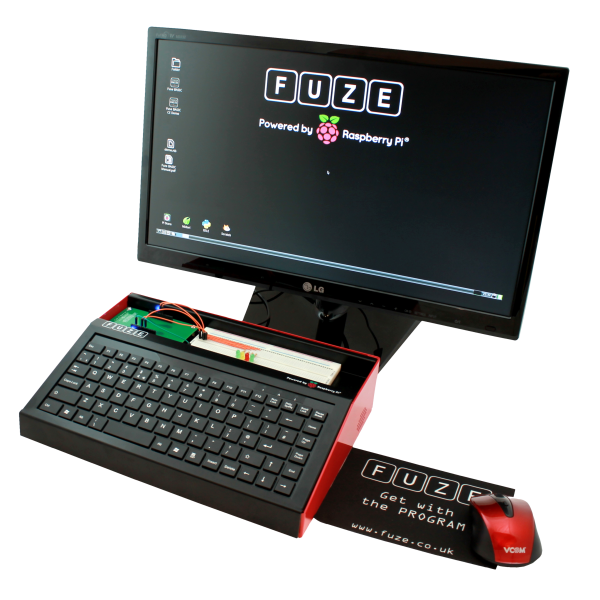 The FUZE is a new programable computer and electronics workstation based around the Raspberry Pi. It's built in the UK and its designers believe it will appeal to the education sector as well as home electronics enthusiasts.

We hope to get some hands-on experience with one soon but in the meantime we spoke to Jon Silvera the managing director of Binary Distribution, the company behind the FUZE, to find out more about it.

BN: For readers who haven't seen the FUZE before can you give us a quick overview of its features?

JS: The FUZE is an innovative new product aimed at teaching computer programing and hobby electronics. The FUZE powered by Raspberry Pi consists of a robust metal case containing the RPi Model B, a UK keyboard, the FUZE IO Board (a very accessible Input /Output interface) providing much needed circuit protection for the RPi. All connectivity is extended to a convenient back panel. Also included in the full package is a mains-to-USB power supply, wireless mouse and mat, 4GB SD card (prepared and ready to run), an electronics components kit, FUZE BASIC along with a hard copy programmer’s reference guide.

Perhaps most important, however, is the inclusion of FUZE BASIC, a specially adapted version of BASIC tailored to the Raspberry Pi and the FUZE project. FUZE BASIC is a comprehensive and somewhat expanded version of the original popular language. A full hard copy reference guide is included for easy access.

FUZE BASIC makes learning to program so much easier and accessible that enthusiasts of all ages will find programing something to embrace, not fear -- it's pre-configured and does not need a new library to run a new command or function. It supports and simplifies the full GPIO functionality of the Raspberry Pi making even complex electronic projects achievable and more importantly, fun.

FUZE BASIC supports all the usual functions like FOR-REPEAT-UNTIL-IF-THEN-ELSE etc, file and screen handling, graphics, Turtle graphics but goes on to include Sprite handling and Input/Output commands that open up all kinds of possibilities. It is, for example incredibly easy to program a simple game but then go on to make the joystick controls to play it -- this is actually a simple project!

The FUZE was conceived and developed with programing as its core focus. The objective has been to make learning, and teaching (!) fun, interesting, self-motivated and easily measurable. The addition of electronic projects that avoid talking about electrons and nuclear physics goes a long way to keep things simple to understand and therefore more achievable across a broad spectrum of age groups and abilities

It's perfect for beginners and advanced programers alike and with the added benefit, interest and fun of LEDs, micro switches, buzzers and more, you're actually learning about the basics of electronics without even realizing it.

The unit can come complete with a UK keyboard, Mouse, and solderless breadboard for electronic projects. For those of you who already own the Raspberry Pi, the FUZE is available as an upgrade for the RPi Model B so you can buy just the case or the case with FUZE BASIC and electronics kit etc.

BN: Who is the FUZE aimed at?

JS: Anyone aged six and upwards. Because the FUZE comes with our specially written PDF project cards, anyone who can read can benefit from the FUZE. We are targeting education as well as the home/hobbyist market, with FUZE BASIC and Python on the Pi it's perfect for all budding or already proficient programers and Scratch is great for learning the concept of programing.

BN: Why did you choose to supply the system with your own FUZE BASIC?

JS: Back in the late seventies and early eighties BASIC was the language of choice. Well, it was that or machine code as BASIC was too slow to do anything other than write text-based programs.

From these early days, thousands upon thousands of bedroom and student coders went on to pretty much form the computer industry we value and enjoy so much today. In most cases these programers started using the BASIC language and then, once being firmly bitten by the coding bug, furthered their skills and abilities with more complex languages like C, Assembly, Pascal and a few others.

But they started with BASIC, not everyone of course but so very many did. Consider the computers by Acorn, Sinclair, Commodore, Atari and Amstrad -- every single machine came with BASIC.

BASIC covers all aspects of programing from simple loops to complicated IF THEN ELSE conditional statements, from simple line drawings to beautiful mathematical masterpieces, from text adventures to graphical platform games, from simple LED off/on projects to atmospheric and environmental measuring tools and so on.

The Raspberry Pi is generally supplied with Python and Scratch which are both fantastic applications but in our view meet the requirements of the two ends of the programing spectrum. Scratch can be a great introduction to understanding some of the fundamentals of programing but it does not perhaps provide a deeper, behind the scenes look at what is actually making the program work -- it is also, I'm afraid, woefully slow on the RPi so can often be more frustrating than productive -- run it on a higher performance Linux or Windows system and it really is awesome! 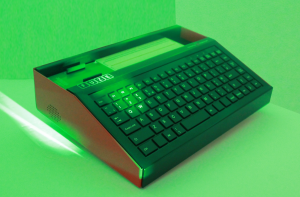 Python on the other hand requires somewhat more knowledge about programing languages and environments than is generally and readily available in primary and secondary schools. Please don't misinterpret our message here, Python is a fantastically powerful and functional language but, in our view this makes it harder to approach than BASIC and as such we've focused our efforts on FUZE BASIC over any other language. It's quite simply, easy to learn and therefore easy to teach -- because of this we believe it’s more fun and rewarding than any other introduction to programing. We feel this is the best approach at a time when expectations are high and we need as many people to be bitten by the bug as possible.

BN: Was it a conscious decision to make the FUZE look like a 1980s home PC?

JS: Absolutely YES! In all honesty, have you ever tried to build a small home computer? It's no wonder these things all looked so similar -- it’s actually very hard not to make it look retro. That said, I'm a real fan of retro computing and as such every effort was made.

BN: Can you tell us a bit more about the project cards that you offer alongside the FUZE workstation?

JS: FUZE BASIC project cards are designed to promote self-motivated learning. That is, it should be entirely reasonable to expect a pupil to get by at their own pace and without the need for lots of intervention -- apart of course, than to demand you come and look at what they've just done!

The projects range from the very basics, to intermediate programing and electronic techniques and methods. Over time they will be expanded to incorporate advanced projects. New project cards will be provided for free, unless part of an electronic project package, from the www.fuze.co.uk website.

As all schools seem to be starting from the same position, they are written, hopefully, to appeal to all ages and not specifically to any key-stage or age group so they can be implemented anywhere within the key stage spectrum.

Projects are short and focused. They also include plenty of computing references and soundbites providing additional learning within the IT curriculum. They cover much of the programing requirements proposed in the recently announced framework curriculum for the UK.

A small admission is needed here. Our original intention was to make around ten or more projects available at launch but this has just proved too much for our humble little business. We are, however, working around the clock and will post new ones as completed on the FUZE website. Initially the FUZE will ship with most likely four to six projects -- more will be posted in the days and weeks following launch, and will be freely available to download.

BN: Why build it in the UK? Wouldn’t it have been cheaper to outsource production overseas?

JS: A very interesting question… This has been a very conscious decision.

With the core drive for the FUZE project being about getting people in the UK programing again, a drive very much driven by the Government after coming to the conclusion that as far as programing in schools goes, they've let things slip somewhat. The result being an incredible amount of revenue never even touching the ground in the UK. Let alone the negative economic implications of thousands of programers being situated everywhere around the world other than the UK which means we miss out on all the taxes, NI contributions, VAT and so on that could generated be here.

We're not talking small amounts either -- just contemplate for a moment the number of apps sold every day in the UK on devices such as Apple iPads and iPhones, Microsoft Surface, Android tablets and game consoles. 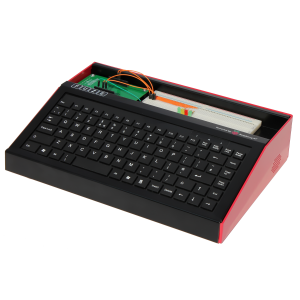 It doesn't take an economic guru, which I am not, long to realize something needs to be done which is why, in my opinion, things have moved forward at such a pace. It’s not flippant therefore to say that with this in mind we wanted to make as much of the FUZE as possible locally. We're based on a Business Enterprise Farm (a real working farm!) in Buckinghamshire, the case is also made in the same county, the boards are made in Wiltshire and the FUZE is assembled by us, here on the farm. Even the packaging is completely recyclable and supplied by local businesses.

It is not, however, easy to buy small electronic components manufactured in the UK or a custom keyboard for that matter so these items have to be imported.

We have always been conscious of the benefits of keeping things local, both to the environment and to doing our bit to help the economy.

Could it be made cheaper? Yes of course it could. Should all of the revenue and jobs be outside the UK? We don’t think so.

BN: Do you have any other versions or updates planned for the future?

JS: We'd like to keep real details under wraps at this point but suffice to say this is not a short term project. There are many long term objectives planned and all of them revolve around one thing; let’s get more kids programing -- it is one of the most secure and likely careers of our future so it would be a smart move to be prepared.