Did Poetic slip and confirm iPhone 5C name and date?

I own several tablets and am always on the lookout for a good deal on a new case for one of them. One place I keep a frequent eye on is Poetic, which manufactures a full line of cases for a number of different devices. As of this afternoon, we can add one more device to that lineup -- the Apple iPhone 5C.

You can imagine the surprise I got upon arrival on the company home page when I was greeted with the image seen above. The company appears to be unveiling its line of bumper cases for a phone that has not yet been released or even announced. In fact, Apple has yet to confirm it will even be holding an event in early September.

A click on the image resulted in the product page which again confirmed the 5C name and the shipping date of September 10 -- sadly no dimensions were listed. Its also unclear if the image was taken with a 5C posing, though that seems rather unlikely. When BetaNews spoke with Poetic representative Linda Cho she would only confirm the date of the bumper release and would say no more when pressed with other questions. In other words, Ms. Cho refused to admit there would even be a phone for this case.

None of this is entirely surprising. It ties nicely with what we have been hearing in rumor form -- the time frame and 5C name have been floating around the internet for a while. However, Apple generally frowns on this sort of thing, trying to keep even the name a secret until the event. As of this writing the page was still live. 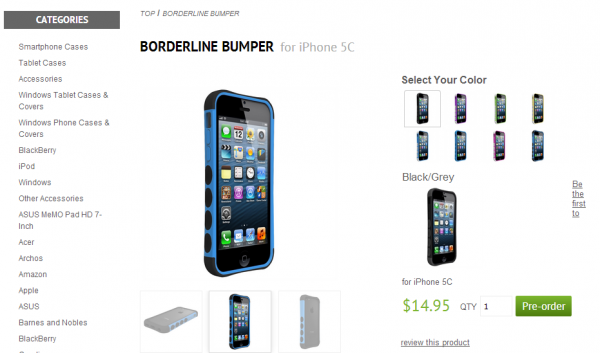 15 Responses to Did Poetic slip and confirm iPhone 5C name and date?