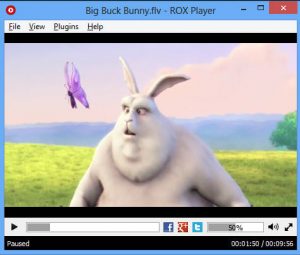 ROX Player is a compact, lightweight and entirely free media player, which supports all the main audio and video formats, without having to clutter your system with codecs, filters or anything else.

Yes, we know -- that’s not the most compelling of program descriptions. ROX Player does stand out rather more in its web support, though, with the ability to stream files via HTTP, IPTV, and even BitTorrent.

We tried playing a torrent, and this was very straightforward, with the File > Open Torrent dialog giving us the option to specify a torrent file, URL or magnet link.

Once downloading has begun, there’s a short pause while ROX Player buffers the first part of your file, which hopefully will ensure glitch-free playback later.

After that, you simply listen or watch as the file is played back, without you having to download it in full, first. Performance will of course vary depending on the bitrate of your source file, the number of seeds, your internet bandwidth and so on, but for small files we found it very acceptable.

What you don’t get, unfortunately, is any way to save the file when it’s fully downloaded. But there is a sort-of workaround here in that it’s temporarily saved under one of the ROX Player folders (C:\Users\User\AppData\Local\ROX Player\torrent by default), so you can always find and copy whatever you need manually. Just don’t forget: close and restart the program and its last download session is automatically deleted.

Another issue here is the core player, which is extremely basic, with very few features: there’s subtitle support, a few video tweaks, and that’s about it.

For heavy-duty P2P, then, you’ll be better off with a real torrent client. UTorrent, for instance, won’t delete files without asking you, and it has streaming support (sort of) built in as well.

If you’re just looking for something simple, though -- or you’d also like to stream files via other protocols -- then ROX Player may still prove very useful. Give it a try.