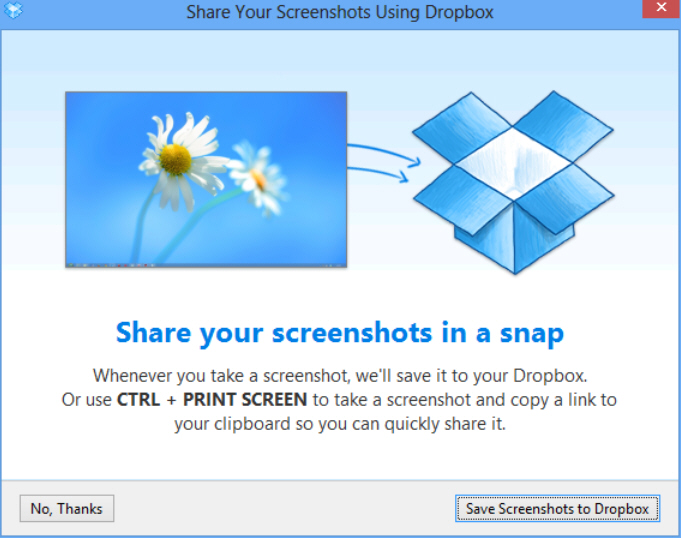 Dropbox 2.4 is now available for Windows and Mac, and the release includes some interesting new features.

The highlight is Screenshot Sharing, which makes it easier to get a screen grab into your Dropbox folder. Press PrtSc, or the appropriate Mac Command key combination, and you’ll be asked if you want to use the new feature; click "Save Screenshots to Dropbox" and they’ll be saved there in future.

And there’s more. The new Dropbox also supports Alt+PrtSc, when you need to capture the selected window rather than the full screen. Pressing Ctrl as well (Ctrl+PrtSc or Ctrl+Alt+PrtSc) copies a link for the image to your clipboard, for speedier sharing. And using the Shift key instead (Shift+PrtSc or Shift+Alt+PrtSc) just copies the image to your local clipboard, as usual, ignoring Dropbox entirely.

For the most part this works reasonably well, although it seems no-one noticed that Windows already uses Alt+Left Shift+PrtSc to turn High Contrast themes on or off. If this is a problem, go to Control Panel > Ease of Access Centre > Make the computer easier to see, and clear the "Choose a High Contrast theme" checkboxes.

If you’re using another screen capture tool which looks for the PrtSc key then you may also have problems controlling which one you launch. Hopefully Dropbox will support customizable hotkeys next, but even now this is a welcome addition.

Elsewhere, there’s also a new Move To Dropbox option which appears in the context menu for most files and folders.

And iPhoto integration sees Dropbox now able to import your photo events into a "Photos from iPhoto" folder (you’ll need a Mac with iPhoto 7.0 or higher).

Downloads of Dropbox 2.4 are available now.