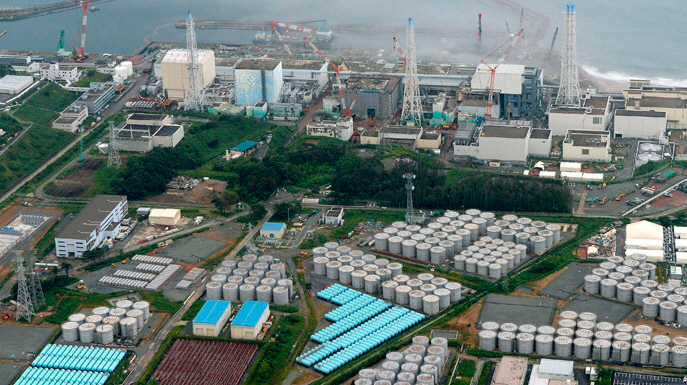 In the middle of a pissing match between the President and Congressional leadership it’s good to remember that the United States isn’t the only government that seems to have lost touch with reality. I was reminded of that today when I read this story about the contaminated water problem at the Fukushima Daiichi nuclear power plant in Japan. Now here’s a government that is truly paralyzed!

The story from Japan Times, if you choose to read it, says Japanese Prime Minister Abe is reaching out to foreign experts in an attempt to deal with the problem of radioactive cooling water that is accumulating in hundreds of makeshift tanks that are now beginning to leak. “We want your expertise!” Abe proclaimed in a speech given in English.

Longtime readers will know I have a background in physics and was a zillion years ago an investigator for The Presidential Commission on the Nuclear Accident at Three Mile Island. I actually know about this stuff and have written previous columns about it including what may have been the first accurate predictions of the accident’s severity and likely outcome. Only hours after the tsunami I said the plant was a goner and why -- explanations that have held up with time.

Tokyo Electric Power Company (TEPCO) and the Japanese government have done a spectacularly bad job of managing this accident. In large part they haven’t managed it. Rather they’ve extended the Japanese patronage system to benefit from the disaster at the expense of public health, public safety, and the Japanese economy.  As a result, the usual suspects in Japan are getting richer than ever while the real problems not only haven’t been fixed, for the most part they haven’t even been addressed.

Let me tell you how I know this. For the past couple of years I have been advising an environmental remediation startup that has excellent water treatment technology. Yes, I own three percent of the company.

The system I proposed would have taken two weeks to get operational and at the time would have cost TEPCO $2 million.

Today, with so much more water to be processed it would cost more than $2 million, but not two orders of magnitude more.

Understand that I did business in Japan on almost a daily basis for more than 20 years. I have deep contacts there and know how business is done. Why is it that a guy like me can’t even get a reply?

Because Japanese industry is too busy making money at the country’s expense.

I have continued to communicate with the right parties in Japan, most recently resorting to trying to reach Prime Minister Abe directly through people I know who know him well right up to Mrs. Abe.

Nobody on this side is trying to make money on this, we’re just trying to save lives. So if you know someone who knows someone who can get things done in Japan, let me know because I have a very viable solution to this one particular problem.

But after two years of trying to help Japan help itself, I’m losing hope.