Google's Nexus 5 is a hotly anticipated handset, and over the past few weeks there have been numerous leaked images purporting to show what the device looks like.

Now it looks as though the speculation can come to an end after Google accidentally listed the device in the Play store, complete with pricing details. The temporary listing -- which has now been removed -- showed the 16GB model costing $349, and featured the tagline "capture the everyday and the epic in fresh new ways".

The "accidental" listing may not have been live for long, but it was up long enough for screengrabs to be captured and full sized images to be downloaded. These were quickly shared on Twitter by many people including Marques Brownlee. The listing itself did not give away much, but the image does seem to show that Android KitKat 4.4 has a new camera and folder icon -- it's interesting to note that the clock is set to 4:40.

Google has been something of a leaking bucket recently, with all manner of rumors about the upcoming mobile circulating around online. At this stage we're still not even sure quite when the official release date is, but it is almost certainly just around the corner now. Whether the Google Play listing of the Nexus 5 was an accident or part of the advertising hype is not clear, but the Google+ page for KitKat has been teasing followers for the last few days as well. 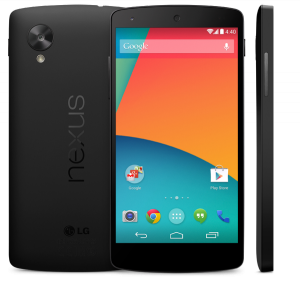 On Tuesday 15 October, a date that many had thought may have seen some sort of announcement, a photo was posted with the caption "Everybody dance now!" -- seemingly a reference to the C&C Music Factory hit released on 18 October 1990 (and a song that was 4 minutes and 4 seconds long). The following day, a photo of the words "This is it" was posted with the caption "Sometimes you have to look for the signs…". This could be a reference to Michael Jackson's This Is It movie which has a 28 October release date. But then there's the album of the same name that came out on the 26th!

It's all too much to deal with! It looks as though we may now know the starting price for the Nexus 5, but we're still a little in the dark about when we might get it. But in the meantime, Google is doing an excellent job of keeping interest levels high... it's certainly working on us!

How about you? Are you looking forward to the Nexus 5 and KitKat?

6 Responses to Google shows off $349 Nexus 5 in Play store -- for a few minutes, anyway