Fantastical 2 for iPhone gets bold iOS 7 redesign, many new features 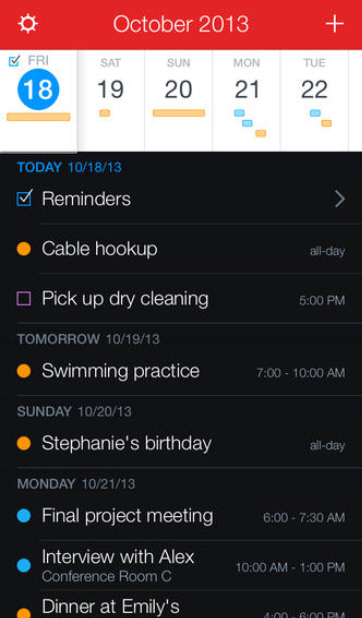 Flexibits has released Fantastical 2 for iPhone, a major new update for its popular calendar app (which, despite its moniker, also works natively on the iPad). Fantastical 2, which is also available for Mac, is designed to work with existing calendar services -- including iCloud and Google -- but adds a more powerful front end for managing and viewing reminders.

Version 2.0 has been redesigned from the ground up to blend in with the new flatter look of iOS 7, but also ships with a number of major new features.

The Reminders tool has been revamped to allow users to view both events and dated reminders together in a single list. It also now supports adding reminders directly from either the main Reminders list or new event screen.

Reminders also now supports dates, times and geofences, which allows users to trigger alerts when they arrive at or leave a particular location.

Version 2 also adds support for new commands, such as trigger words for creating reminders (including "reminder", "todo", "task" or "remind me to"), recurring events ("second Friday of every month", "every weekend" and "last weekday of the month") and alerts ("alert 1 hour before" and "alarm 7AM").

Fantastical 2 also adds new event details for recording extra information such as a map of the event location and wider options for setting up recurring events. Similarly, users can now tap on a birthday for contact information or to send a quick greeting.

The new version also adds a weekly view, accessible simply by rotating your iOS device to landscape orientation, plus includes a new background app updater that pushes events, reminders and alerts to Fantastical from cloud-based services even if it’s not opened frequently. Support for TextExpander has also been implemented.

Fantastical 2 for iPhone (and iPad) is available as a paid-for purchase through the App Store. For a limited time only, it’s on special offer at $2.99. Mac users can also download a 14-day trial of Fantastical 1.3.10 – the full version costs $14.99.