Check your Android apps for privacy risks with Clueful 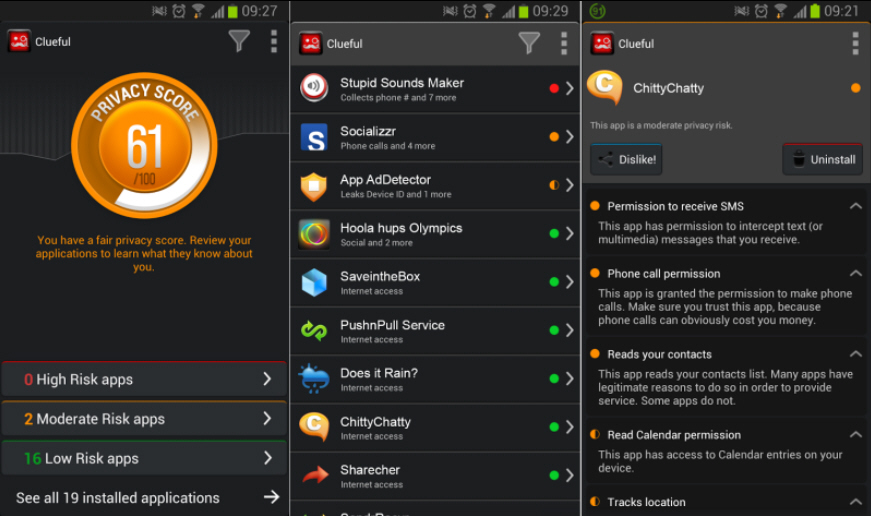 You’ve found an essential Android app. You click "Install", wanting to check it out immediately. And so, let’s be realistic, you’re probably not going to spend a long time reviewing the app permissions, and thinking about whether it really needs to "send SMS", or not. Much easier to just click "Accept" and give it a try.

Skipping basic security checks can catch up with you later, of course, but install Bitdefender’s Clueful and this doesn’t have to be such an issue. This free app warns you of privacy risks whenever you install something new, and can produce a detailed report on your system whenever you like.

Launch Clueful for the first time and it examines each of your apps in turn, checking them against Bitdefender’s cloud database, and finding out just what they’re allowed to do on your PC. Once this first stage is over, you’ll be presented with a "Privacy" score for your PC. Don’t be surprised if this seems rather low; we started at only 56/100.

Choosing the option to view all your apps reveals more. They’re presented in approximate order of privacy risk, with dangerous at the top, safe at the bottom. You’ll see that many popular apps -- AirDroid, Avira, Facebook, Google+, Twitter and more -- are rated as a "moderate risk". And that’s because Clueful’s privacy score comes mostly from the number and type of permissions each app has been given. Unlike antivirus tools, "file reputation" doesn’t play much of a part, so even the most trusted developers may be rated as risky.

The score doesn’t really matter, though. What’s more important is to browse Clueful’s list, and find out more about your apps. If you spot something high on the danger list, and you don’t understand why, then tap it and take a look at the app’s permission list. Are there any surprises? Does it really need to make phone calls, send or read SMS, read your contacts, access photos, whatever it might be? Use the "Like" or "Dislike" button to tell Clueful what you think of the app. Or, if the risks seem high and you don’t need it anyway, tap "Uninstall" and it’ll be quickly removed.

If the full list is too lengthy, clicking the Filter icon top-right provides easy ways to highlight apps which "can cost you money", "send data unencrypted", "have access to sensitive data", and more. Choose any of these filter options to view a shortlist of offending apps.

And although Clueful’s initial privacy score doesn’t really mean too much, the way it moves later can be a useful clue. It’ll be updated every time you add or remove an app, so if you find your score drops drastically in a short period of time then that’s a good sign you need to investigate, just to find out why.