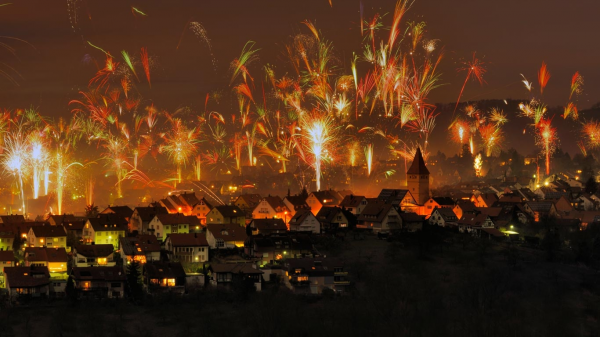 It’s the eve of 2014 and, let’s face it, tech news is scant on this day. Silicon Valley has taken a hiatus, but will return next week, with the kickoff of the Consumer Electronics Show in Las Vegas. But a holiday is always good for one thing -- checking the search engines to see how each is celebrating the event.

Google today has gone all 1970’s on us, with dancing and a disco ball. The animated numbers 2 0 1 3, are having a blast as the speakers pound out an unheard rhythm and the mirrored ball spins above. One would think we were on the verge of welcoming in 1977, and you can almost hear the Chic music playing in the distance, but actually it's 4 that's waiting impatiently for its chance to take over 3's spot on the colorful dance floor.

Bing, on the other hand, known for its stunning photography used as a daily backdrop for its search page, celebrates the day with a New Year’s Eve fireworks display, photographed over Korb, Rems-Murr district, Germany -- we sincerely hope no homes were harmed in the making of this image.

Even Samsung, though not a search engine, gets in on the act today, posting a message on its company blog wishing everyone a Happy New Year, though you’ll need to translate the message, as it is written in binary.