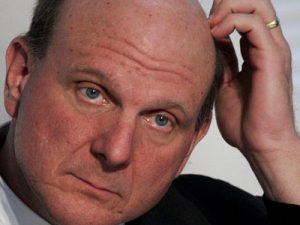 Here is my first of two prediction columns for 2014. There’s just too much for it all to fit in one column. My neighbor and good friend Avram Miller wrote a predictions column this year that’s quite good and you might want to read it before this one. We discuss some of the same things though of course Avram and I occasionally agree to disagree.

This column is mainly about business predictions for 2014 while the follow-up column will be more about products and technologies.

#1 -- Microsoft gets worse before it gets better. Ford CEO Alan Mulally, who already owns a home in Seattle, announced just today that he is staying with Ford through 2014 and absolutely positively won’t be the next CEO of Microsoft. This firm statement is in contrast with his kinda-sorta firm denials before today. What this means to me is that Mulally was in hard discussions about the Microsoft job but walked away from the deal. Since there’s a clock ticking on Ballmer’s retirement someone will get the position but that someone will now probably be an insider, possibly Stephen Elop.

This is terrible news for everyone, even for the people who made it inevitable -- Steve Ballmer and Bill Gates. Mulally would have taken the job had Ballmer and Gates resigned from the Microsoft board. They wouldn’t and so he didn’t, the result being more palace intrigue and behind-the-scenes micromanaging not to good effect. Whoever gets the top job won’t have the power to do what’s needed and probably won’t have the job for long.

Microsoft’s future lies in the enterprise and the quicker it gets out of consumer products the better for the company, but a weak CEO won’t be able to move fast enough.

We’ll revisit this one next year when Mulally may again be on the short list.

#2 -- IBM throws in the towel. Any minute some bean counter at IBM is going to figure out that it is statistically impossible for the company to reach its stated earnings-per-share goal of $20 for 2015. Cutting costs, buying revenue, repurchasing shares and short-changing both customers and employees no longer adds-up to enough financial power to get the job done. This will lead to a management crisis at Big Blue. On top of that throw half a dozen customer lawsuits over bungled projects and it doesn’t look good for the regime of Ginni Rometty.

Can she pivot? That’s the question. Rometty has been trying to follow her predecessor Sam Palmisano’s playbook but it isn’t working. She needs a new strategy. This is actually a great opportunity for both Rometty and IBM, but the second half of this prediction is they’ll blow it. Rometty and IBM will survive 2014 but it won’t be pretty.

#3 -- BlackBerry to Microsoft. Assuming Elop gets the top job at Microsoft (not at all a shoo-in) he’ll approach the enterprise play from a mobile angle and that means buying BlackBerry. Microsoft will get enough patents from the deal to further enhance its revenue position in the Android market (you know Microsoft gets royalties from Android phones, right?). Redmond will get a great R&D facility in Waterloo and thousands of super-smart employees. I think this will happen, Elop or not. The only alternative purchasers are Intel and Qualcomm and I don’t see Microsoft doing that.

#4 -- Intel does ARM, kinda. The idea that Intel would go back to building ARM processors is supposed to be a big deal but I don’t see it happening without some external push. Remember Intel has been down this route before, eventually selling its StrongARM operation to Marvell. What’s key here is that Apple needs to dump Samsung so it’ll force Intel to fab its A-series processors by threatening to stop buying desktop and notebook CPUs. It’s not as big a deal as it sounds except that Samsung will be losing its largest customer.

#5 -- Samsung peaks. With Apple gone and Samsung phone margins eroding, what’s the company to do? 4K TVs aren’t it. Samsung needs to actually invent something and I don’t see that happening, at least not in 2014.

#6 -- Facebook transforms itself (or tries to) with a huge acquisition. I wrote long ago that we’d never see Facebook in the Dow 30 Industrials. The company is awash in users and profits but it's lost the pulse of the market if it ever had it. Trying to buy its way into the Millennial melting data market Facebook offered $3 billion for Snapchat, which turned it down then rejected a $4 billion offer from Google. Google actually calculates these things, Facebook does not, so where Google will now reverse-engineer Snapchat, Facebook will panic and go back with the BIG checkbook -- $10+ billion. If not Snapchat then some other overnight success. Facebook needs to borrow a cup of sugar somewhere.

#7 -- Cable TV is just fine, thank you. Avram thinks cable TV will go all-IP. This is inevitable and in fact I wrote about it the first time at least eight years ago. Cable companies already make all their profit from Internet service so why do anything else? But not this year. That’s one for 2016. For the moment cable advertising is in resurgence and these guys aren’t going to make any significant changes while they are still making money. Look for more cable industry consolidation but nothing revolutionary… yet.

#8 -- The Netflix effect continues, this time with pinkies raised. Hollywood is for sale. Nothing new there: Hollywood has always been for sale. Remember when it was Sony buying Columbia Pictures that was supposed to change entertainment forever? How did that work out? Now it’s Netflix blazing a new trail for content creation that threatens the old models except it doesn’t. Netflix knows from its viewer logs who likes what and can therefore make original programming that’s reliably popular. Amazon, in contrast, asks its users what they like and hasn’t been nearly as successful as Netflix at original content. Amazon will learn in time (it always does) but one of the things it’ll be learning is that people lie about what they like, though not about what they watch. Hollywood already knew that. Amazon doesn’t need to buy Netflix to learn this lesson, so I seriously doubt that Netflix is going to be in play. But Hollywood itself will very much be in play… in 2016.

#9 -- What cloud? The cloud disappears. My old friend Al Mandel once told me "The step after ubiquity is invisibility". This means that once everyone has something it becomes a given and gains commodity status along with dramatically lowered profit margins. In the 240 suggested predictions I saw over the last few days from readers almost nobody used the word cloud. It has effectively become invisible. Every IT startup from here on will rely strongly on the cloud but it won’t be a big deal. Commoditization will have cloud providers competing mainly on price. This means there are unlikely to be any significant new entrants to this space. The cloud opportunity, such as it was, has come and gone.

#10 -- Smart cards finally find their place in America. I covered smart cards in Electric Money, my PBS series from 2001, yet they still aren’t popular in the USA. Smart cards, if you don’t know it, are credit or debit cards with embedded RFID chips that impart greater security though at a cost. They’ve been popular in Europe for 15 years but American banks are too cheap to use them... or were. The Target data breach and others will finally change that in 2014 as the enterprise cost of insecurity becomes just too high even for banks Too Big to Fail.

Look for 10 or so more product predictions tomorrow.

4 Responses to Ten technology predictions for 2014