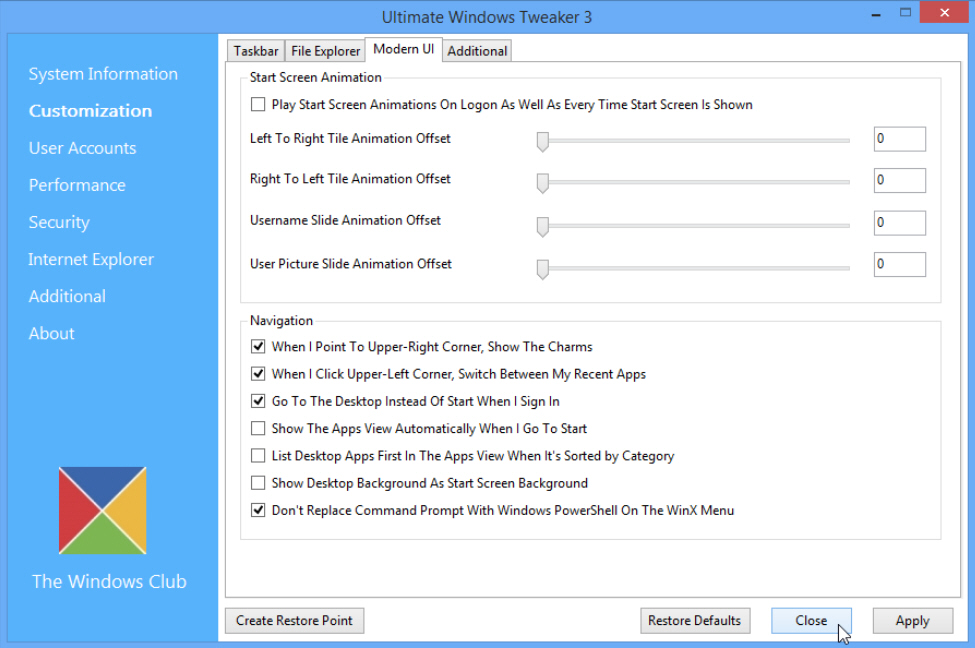 The Windows Club has released Ultimate Windows Tweaker 3.0 for Windows 8 and 8.1 users. The lightweight, portable freeware tool makes it easy to tweak various aspects of Windows that usually hidden away or require access to Registry editor or Group Policy Editor.

The new release sits alongside the previous version, Ultimate Windows Tweaker 2.2, which requires Windows Vista or 7.

The app -- which comes in a zip archive -- takes up just 340KB when extracted, and contains with over 170 tweaks, a net increase of around 20 over the previous release. Version 3.0 sees the app re-imagined for Windows 8 and 8.1 users, with a number of new OS-specific tweaks added while removing others no longer deemed relevant for the new release.

The most visible change can be found in the Customization section, with tweaks now divided up into four tabs, including a brand new Modern UI tab. Here users can configure Windows 8 to boot straight to the desktop rather than the Start screen and disable various hotspots. Users can also modify the Start Screen animation.

Version 3.0 also takes the opportunity to reorganize the app, so users familiar with previous versions will need to reacquaint themselves with the location of various tweaks (Network tweaks are now found in the Additional section, for example, while tweaks previous found under Additional Settings have been moved to the Customization section).