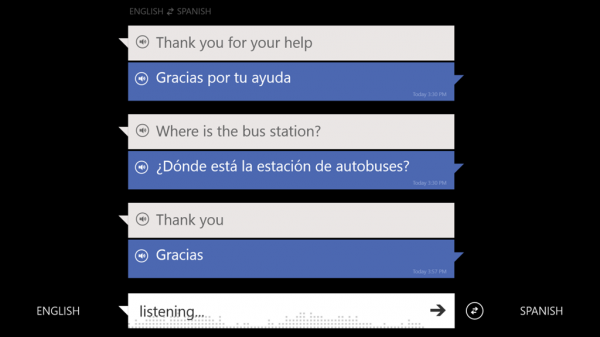 Translation has become a big thing for search engines. If you use Chrome then you have likely seen a translation option pop up when you click a story that isn’t in your native tongue. But Google is not the only one that can do this -- Bing too has translation capabilities.

Now Microsoft's search service is upping its game, announcing new features to its translation engine. The update is available for both Windows Phone and the desktop.

"Now you can leverage the power of speech-to-speech translations from any Windows device", Microsoft says. "Simply speak into your device by using the microphone feature to place orders or ask for directions and hear the translated words in a native speaker's accent".

That’s the biggest news, but not the only enhancement made to the service. Bing Translator has also introduced a camera feature, letting users point the lens at foreign text, snap a shot and then view the translated words in the image.

The update is rolling out today for both Windows and Windows Phone. It’s free to download and install. Could be handy for that next trip abroad.