The Internet of Crap 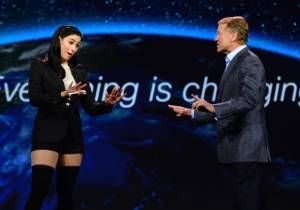 In fact don’t just throw away all the stuff you have now, also throw away every networking gizmo you’ll buy for probably the next year before the real stuff is ready.

The Good Old Days of the record business were when the music companies got us to pay all over again to replace our vinyl records with CDs containing the very same music. The Glory Days of home video were when we trashed our VHS and BetaMax players and bought everything all over again on DVD. Those are the kind of days Cisco sees ahead and Mr. Chambers -- and technoid Sarah Silverman of course -- is lusting for it.

The idea that we could be talked into throwing everything away is right up there in marketing lore with Arm & Hammer getting us to pour baking soda down our drains.

But of course that’s not what Chambers said last week at CES, was it? Chambers never mentioned having to trash all our equipment to create the networking future that he envisions.

We have to trash all our old stuff in part because IPv6 is required for the Internet of Things to succeed. But much more importantly we’ll have to trash it because that equipment is insecure and in large part its innards are unknown even to the folks who sold it to us.

If Cisco says they can update the firmware on your old Linksys 54GS wireless router and make it work with the Internet of Everything they are at best guessing and at worst lying.

If you don’t start from scratch -- completely from scratch -- then vulnerabilities will remain that can be exploited by the bad guys. One piece of bad equipment is all it takes for someone somewhere to go all NSA on your network.

So this week I followed my own advice replacing every bit of networking kit at my house. I moved the firewall completely out of the house, opting for a cloud-based service I won’t have to update. The new networking equipment is all Gig-Ethernet and 802.11AC. It’s better, faster, more secure and more reliable but it also cost over $6,000 in all. And even then I’m not claiming it can’t be hacked or it won’t be obsolete a year from today.

Every network can be hacked, which is the other reason why it is still the Internet of Crap.

Understand I’m not saying Chambers is wrong. What he describes is inevitable. I’m not even saying it’s unfair that all our old stuff has to go, though it is misleading not to say so up front. What I am saying is that the benefits of the Internet of Everything will cost us all a lot of money.