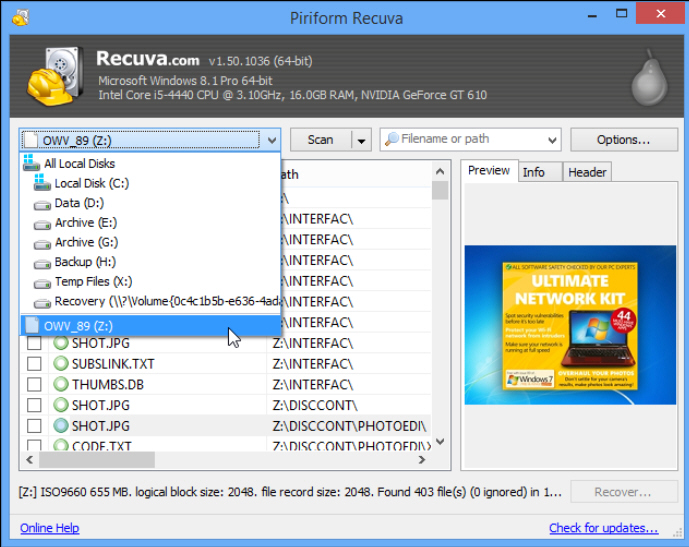 Version 1.5’s headline feature is its newly acquired ability to recover data from unmounted drives, while it also adds support for the ISO9660 file system as well as Junction Point recovery.

Recuva 1.47 allows users to recover lost and deleted data from hard drives -- the Portable build can be unzipped and run directly from a removable device such as a thumb drive, ensuring data isn't written to the drive users are trying to recover data from.

Recuva makes it possible for users to recover both lost and deleted data from hard drives without having to pay a penny -- the portable version comes in zip file form, making it possible to extract and run the program directly from a removable drive, ensuring the program doesn't have to be installed on the drive on which data recovery will be attempted.

Support for unmounted drives means that users can now attempt data recovery from drives and partitions not ordinarily visible in Windows itself -- including drives that haven’t been assigned a drive letter. Note, however, that the drive itself must be recognized by Windows in order for data to be extracted from it.

Version 1.5 also adds support for the ISO9660 file system, which allows users to scan CDs and DVDs for deleted or lost files -- simply select the drive from the drop-down menu and click Scan to see what’s recoverable.

Recuva 1.50 and Recuva Portable 1.50 are available now as a freeware downloads for PCs running Windows XP or later.