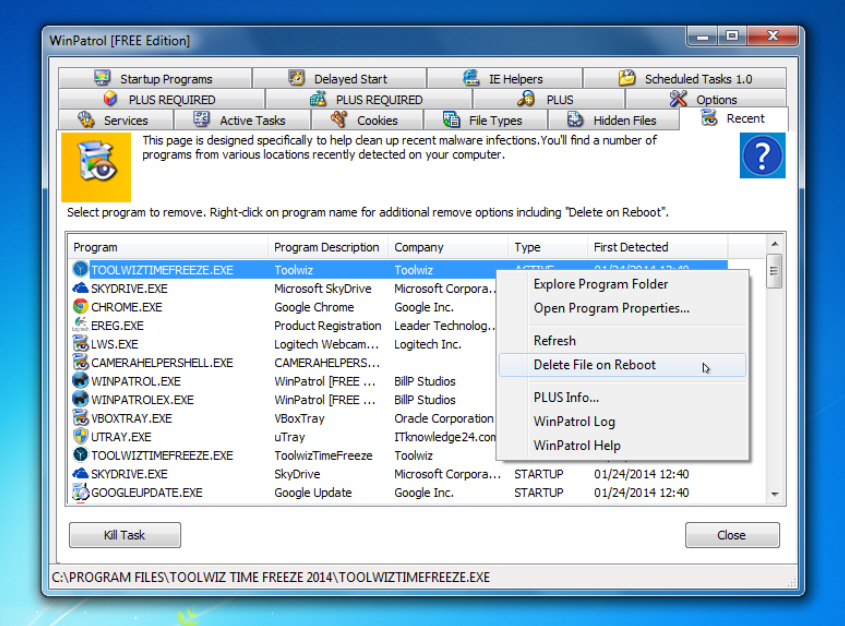 BillP Studios has unveiled the 30th major version of its snapshot-based security tool with the release of WinPatrol 30.0.2014. Although this release isn’t a beta, it’s been billed as a "Preview", with many additional enhancements -- including support for international date formats -- promised to follow.

What is already present in the new release is an interface redesign, improved performance, enhanced reporting, new cookie support, better handling of Windows Update and a tweaked Delayed Start function.

BillP claims the redesigned user interface looks as "new as Windows 8 but will continue to work just as easy on Windows XP". Most changes are purely cosmetic in the form of new, more colorful icons; the basic layout of the program remains the same.

Improved performance centers around WinPatrol’s real-time monitor, geared particularly towards older single-core machines with limited memory (WinPatrol continues to support XP, even though it’s about to reach End of Life). One way this has been achieved is by storing common system checks in WinPatrol’s own memory rather than reading them directly from the Registry -- tools like Process Explorer should immediately display the reduced CPU demands and drive usage as a result.

The new release also updates its cookie support to handle Firefox and Chrome using a newer version of SQLite, and is released ahead of plans to extend WinPatrol’s capabilities to monitoring both Chrome and Firefox plug-ins for changes, timely seeing recent reports revealing attempts by spammers to obtain legitimate Chrome extensions and turn them into adware.

Other changes include better handling of Windows Updates to reduce the number of warning messages WinPatrol delivers without compromising user security.  Some tweaks and fixes have also been implemented including removing typos and improvements to the Delayed Start feature to better handle unique filename and parameters.

WinPatrol has also revealed its first priorities for future development in 2014. Plans are afoot to make the program more supportive through tooltips and help materials. Also in the pipeline is support for Schedule Tasks 2.0, a priority for the developer as he’s discovered users have been signing through browser hijacks that masqueraded as scheduled tasks.

WinPatrol 30.0.2014 is available now as a free, function-limited download for PCs running Windows XP or later. A Plus version with additional functionality is also available.