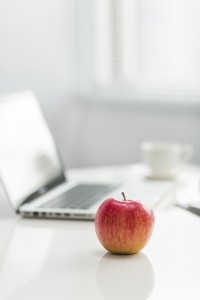 Apple overtakes Microsoft! That’s not a headline you'd expect to read, and when you look at sales of Macs versus Windows desktops, Macs and Windows laptops, or any combination of these, it is Windows devices that are always going to come out on top. But look at things from a different angle and it is a very different story. In Q4 2013, the number of Apple devices sold exceeded the number of Windows PCs sold around the world.

This is an interesting demonstration of the notion that mobile devices are very much on the increase. Compared to Windows PCs, Macs account for a very small percentage of computer sales, but once sales of iPads, iPods and iPhones are factored in, Apple overtakes PCs -- not by much, but it is still significant. It is also worth noting that while Windows Phone is widely derided for poor sales, once these smartphones are included, Windows devices return to the top of the charts -- but again, not by much.

Obviously it is not usual to compare the sales of mobile and non-mobile devices achieved by one company to just non-mobile sales made by another, but these figures do make for interesting reading.

As analyst Benedict Evans notes: "This is a pretty good illustration of the scale of mobile: Apple limits itself only to the high end of the mobile market but still sells more units than the whole PC industry".

It appears that users' reliance on traditional desktop software is starting to diminish, which will come as good news for Microsoft keen to push Surface 2 devices running Windows 8.1 (RT).