Qplay is the Devil in my living room 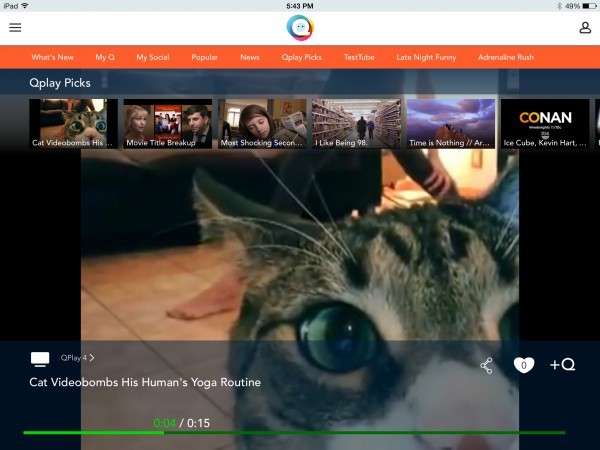 So I received Qplay last week, but only set up the thing today. Definitely I won't ever spend cash on preview programs again. Mother of God. Sweet Jesus. Someone save me from the choppy performance controlling the streaming box from iPad Air.

Did these guys grow up before multitasking? If I'm watching a video and want to scan the thumbnail strip for something else, Holy Moly, the vid stops and waits for me to tap the next thing.

Then there is the cat bomb video spreading the social networks today. Click. Click. Click. Won't play. So I end up watching Jimmy Eat World play live -- yeah that's good -- only to see the cat's big `ol eyes replace the concert song about 30 seconds in. That beast is possessed! Call the priest and schedule an exorcism.

The damn cat movie has nine lives! Not only won't the video stop repeating, but during the third play the app switches back to the tablet from the TV. Well, Hell.

Speaking of the device, the set up is the Devil's spawn. Father, forgive me! You disconnect iPad from your WiFi network and connect to the Qplay hotspot (You Sexy Thing!), which brilliant password is -- oh, and it's a sin: SetupPassword. So what? Anyone knowing the SSID can hijack my device?

You open Safari, go to "inv.tv", name the device, and from there connect to your WiFi network. Don't forget to rightly reconnect iPad to your regular hotspot.

It's like these guys took Nexus Q's worst performance hiccups and combined them to produce the anti-Chromecast. I swear there's "666" visible somewhere on the device.

Forgive my sins, but I must call colleague Brian Fagioli wrong for asserting Qplay is a "more expensive and limited Chromecast alternative". Qplay isn't even that good -- not on my iPad in the Wilcox home. Chromecast works well and delivers what Google promises. Qplay promises more and delivers much less user experience.

I haven't paid to join a beta program since Bill Clinton was president. Never again. I was tempted. I ate the forbidden fruit in a moment of weakness and paid the price -- $52.92 that should have been spent renting movies from Google Play and enjoyed on Chromecast. Oh, wicked ways!