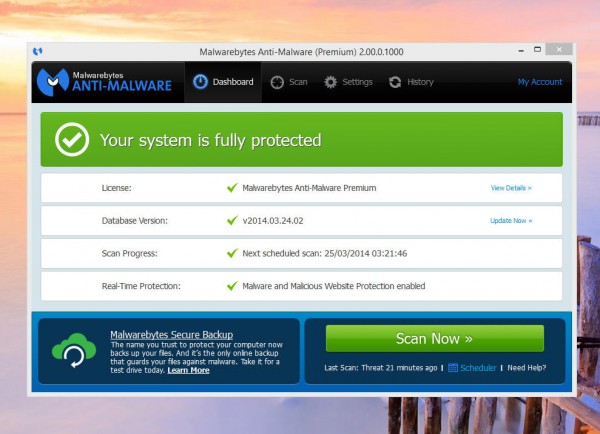 The antivirus industry is getting steamed up about the forthcoming end of XP support. Last week we saw Avast warning of the vulnerabilities users might face.

Today anti-virus specialist Malwarebytes announces its new Anti-Malware Premium product and at the same time is pledging that it will continue to support XP users for life.

The company says that XP users currently make up 20 percent of its user base and could be at greater risk after 8 April when support for the old operating system ends.

The company hopes that continuing support for XP will boost its presence in the business market. Marcin Kleczynski, Founder and CEO of Malwarebytes says, "Corporate users can't just upgrade, they may have legacy software running on XP and don't what to spend millions on updating".

The new program doesn't replace the free Malwarebytes cleanup tool which has been downloaded more than 200 million times and will continue to be offered. Anti-Malware Premium will be available later today, existing users with lifetime licenses for Malwarebytes Anti-Malware PRO will get a free upgrade to the new version.

Kleczynski concludes, "We are proud of what we have created and believe it builds upon the success of our existing products to give people a strong proactive countermeasure against today’s advanced online threats".

23 Responses to Malwarebytes commits to lifetime support for XP users

Amazon sucks up Roomba for $1.7 billion

Hybrid work needs to move on from pandemic-era tech