Compress your JPEGs by up to 20 percent with wxPackJPG 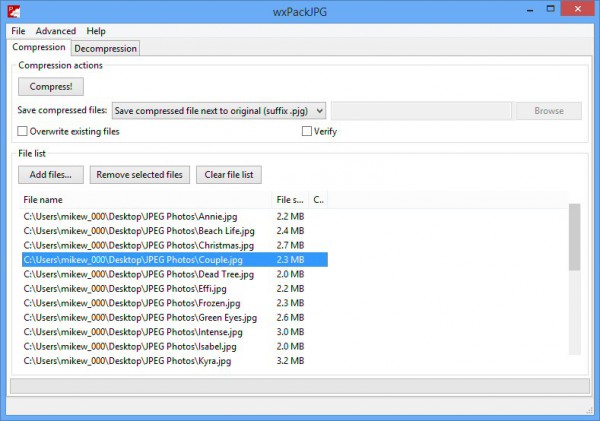 JPEG compression is amazingly efficient, but while this is normally good news, it’s a little disappointing when you’re archiving. Store your JPEG library in a zip file and you’ll barely cut their size at all.

Choose a more specialist compression format, though, and the results can be very different. WxPackJPG is a graphical front end for the open-source PackJPG. It claims to compress JPEGs by up to 20 percent.

The program has a plain interface, but is easy enough to use. Point it at your target files, click "Compress", and it converts your original JPEGs to PJG equivalents. Simple.

How effective is it? We zipped up 25 high-resolution images and saved less than 0.5 percent, which was as we’d expected.

We ran the same photos through wxPackJPG and it cut the total file size by 16 percent. That’s not quite the 20 percent suggested by the developer, but it’s still very impressive.

What’s more, the program isn’t resizing images, tweaking image quality or anything else. This is true lossless compression; if you decompress a file, you’ll get something which is binary identical to the original. (There is also an option to strip out metadata to save even more space, but that’s turned off by default.)

There is some obvious inconvenience here in converting your JPEGs to PJG. Not least being that you won’t see a thumbnail of them any more, so to check what a picture really is, you must manually decompress it and open the new file.

WxPackJPG doesn’t do much to help here, either. Double-click a PJG file and by default it opens in wxPackJPG, which makes sense. We double-clicked that file, hoping it might have a temporary copy decompressed and displayed for us… But no. There are no shortcuts to help you view individual PJGs, you must decompress them to JPGs first.

These are small points, though, and on balance wxPackJPG does a great job. It’s significantly better at cutting JPEG file size than standard techniques, and if you need to archive a large JPEG library then it could be very interesting.