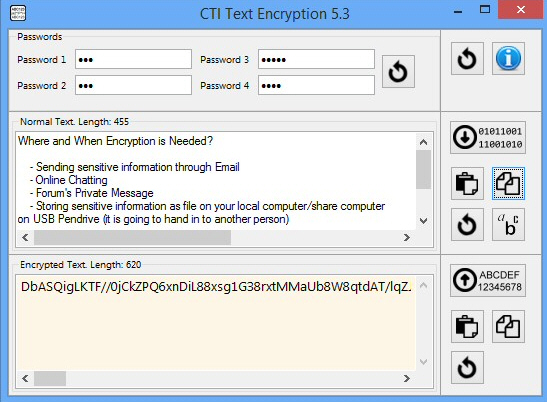 CTI Text Encryption is a lightweight, portable text encryption tool. It’s ideal for sending sensitive information via insecure channels (email, online chat, web forums), perhaps from someone else’s computer, although you can also use it to save confidential data in files or elsewhere.

The open source program is a tiny download (827KB), a single executable with nothing else attached. Copy the file to a USB stick and it’s ready to use almost anywhere.

CTI Text Encryption’s interface appears a little confusing initially, as it has almost no text labels or prompts. Fortunately its buttons do have tooltips, so hovering the mouse over each one reveals some helpful clues.

The process starts by entering the encryption passwords you’d like to use. CTI Text Encryption supports up to four, which means you don’t necessarily have to remember garbage like "[email protected],%*\jwX" to maintain your security. Entering something like the names of three or four childhood pets will be far easier for you to remember, but almost as difficult for anyone else to guess.

After this, CTI Text Encryption works more or less as you’d expect. You type or paste text into the source box and click "Encrypt". The program uses SHA512 to hash the passwords, 256-bit AES (Rijndael) to process the text, and displays the results in the "Encrypted" box. ("Hello world" became "ZNz02G1/x+susprkZONobg==", for example.)

One click then copies the encrypted text to the clipboard, where you can paste it into an email, a forum message, wherever you like. A friend who also has a copy of CTI Text Encryption -- and knows your passwords -- should be able to read what you’ve said, while everyone else will be locked out.

What you don’t get is any option to load, encrypt/ decrypt or save text files directly. You can work around this by, say, opening a text file in Notepad, copying and pasting this into CTI Text Encryption, but that’s not as convenient.

There is also one slightly bizarre extra, in the ability to set a font. This is preserved within the message, so whoever is decrypting it will not only see your words, but also their chosen font. It’s difficult to see why you would care about this -- and presumably it could introduce problems, if the recipient doesn’t have the same font -- but the feature is here if you need it.

CTI Text Encryption has a few small issues, then, but in general works very well: it’s simple, straightforward, and provides an easy way to encrypt small text messages from almost any PC.

3 Responses to Protect your personal messages with CTI Text Encryption