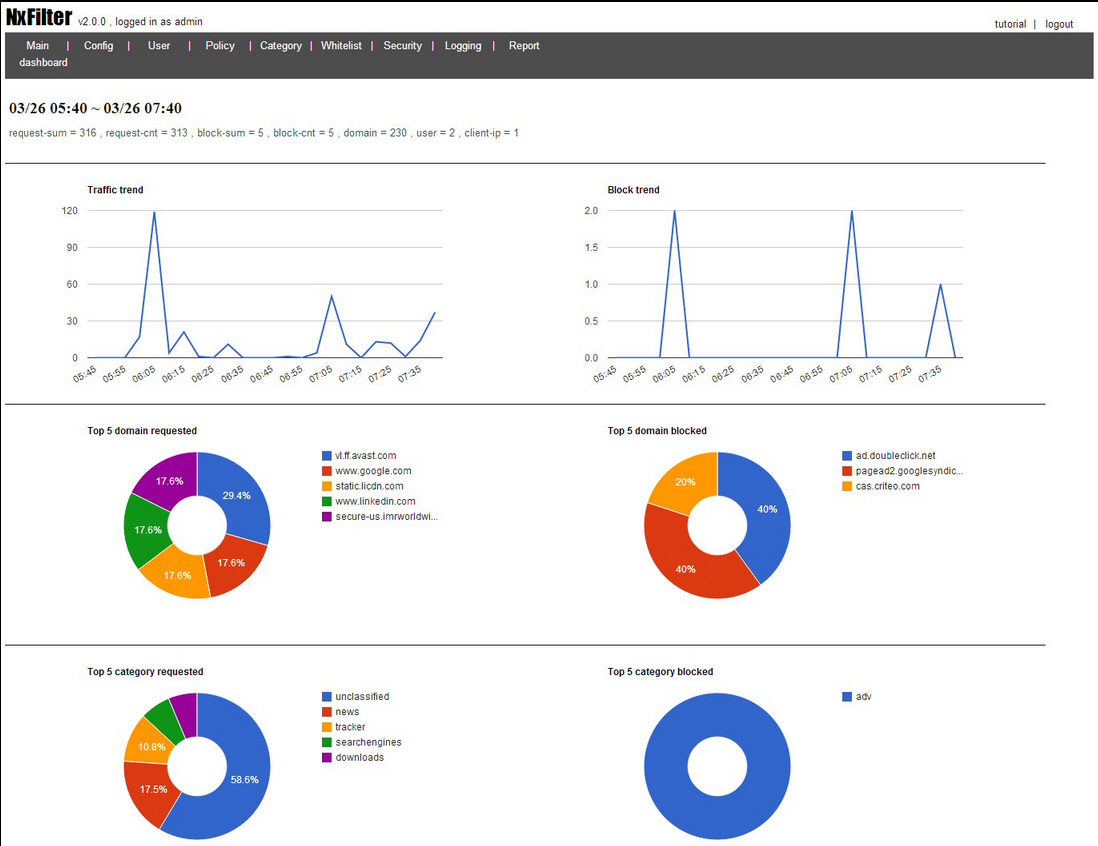 Install most security suites and you’ll get some form of web filter, blocking sites according to their content, a blacklist, or both. This works well enough on a single PC, but performance can be an issue, and it’s not going to help if you need to protect your whole network.

NxFilter is a DNS-based web filter, so there’s no text-based content filtering. But the program can block access to websites based on domain, category, user, time, quota and more. There’s built-in phishing protection, updated every two hours, while packet inspection can detect malware and bots. One installation can protect your entire network -- and it can all be yours for free.

Setup isn’t always straightforward. You’re left to decide how and where you configure your system (or network) DNS servers, and while this makes sense, even the web tutorial doesn’t walk you through every detail. It’s still not difficult -- if you’ve created or managed a Windows network then you won’t have much trouble -- but if you’re a network novice then it may take a while to figure things out.

Get NxFilter running on one PC, though, and it brings benefits right away, blocking known phishing sites and using packet inspection to detect some malware. A browser-based console displays stats on web traffic, blocked domains and more, as well as logging your internet activities.

If you need more control, it’s possible to create NxFilter policies which block sites by category (75 in total), or only allow access to particular site categories -- or all internet access -- for a certain amount of time a day. A built-in netflow collector means you’re able to set bandwidth limits, too.

Your policies can then be applied to individual network users, or groups of users. And you’re even able to assign policies based on a time range, so for example an office might have a very loose policy at lunchtime, but something much more restrictive for the rest of the day.

If you’re thinking this sounds extremely flexible, then you’d be right: but it’s just the start. If the default site blocking isn’t enough, NxFilter supports adding domains manually, or grabbing the blacklist from Shalla List or www.urlblacklist.com. You get a stack of configuration options, there’s even support for authenticating users via LDAP and Active Directory (as well as password and IP address), all while delivering great performance (the developer claims NxFilter can handle "several thousands of users easily", and we wouldn’t disagree).

Again, there is some complexity involved here, if only because of the lengthy feature list, and configuring NxFilter takes some time and thought. But if you can manage a PC network then you shouldn’t have much trouble, and what you’ll get for your efforts is one of the most capable and configurable free web filters around.

One Response to Control web access across your network with NxFilter