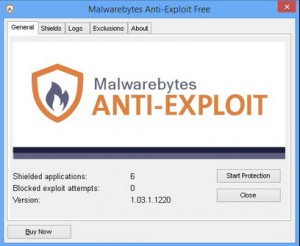 Malwarebytes has announced the first full public release of Malwarebytes Anti-Exploit, a powerful tool which protects against many zero-day exploits. It’s now available in three editions.

A basic Free version shields some browsers (IE, Chrome, Firefox, Opera), their addons, and Java, on Windows XP or later.

Malwarebytes Anti-Exploit for Business then takes the program further with remote management and centralized reporting.

All editions have improved on the beta with various new exploit techniques, some small practical changes (automatic upgrading to new versions) and various bug fixes. The official changelog has the details.

Is the technology effective? Unsurprisingly, Malwarebytes says yes, pointing to a (sponsored) blog post with tests showing that Anti-Exploit defeated everything thrown at it. The blogger found it even protected against a Java exploit where Microsoft’s EMET failed, and the only faint issue was some doubt over its ability to stop kernel-level exploits.

For us, the core advantage of Malwarebytes Anti-Exploit remains its simplicity. There’s no configuration involved, no bulky signature updates, no conflicts with other antivirus or security tools. It runs on any version of Windows from XP up, uses minimum resources (3.3MB RAM on our system), and for the most part you can forget it’s there: it just works. Go take a look.