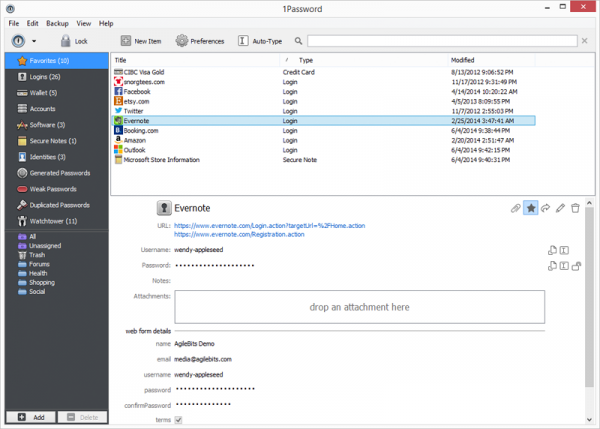 Toronto security firm AgileBits has completed its round of major updates to its secure password storage service with the release of 1Password for Windows 4.0. With version 4, AgileBits has revamped the Windows build, significantly closing the feature-set gap between it and the more fully developed Mac version.

Highlights of this release include tighter security, a number of significant new features and the promise of vastly improved performance, and follow on from the recent Android update.

Security has been improved on two particular counts: first, the Strong Password Generator has been improved to include a diceware generator capable of suggesting over 17,500 words between four and eight letters in length.

1Password 4.0 for Windows also adds the 1Password Watchtower service, which provides warnings when a Login item has been compromised, plus provides advice on when it’s safe to update passwords.

Custom fields can now be added to both Wallet and Account items, while each login item can now be assigned to multiple URLs -- useful where passwords are shared across login items (not recommended).

Speaking of which, a new Duplicate Passwords category makes it easy to track down shared passwords, which -- coupled with another new class (Weak Passwords) -- allows users to further strengthen security by assigning unique passwords to each login item.

New features include a favourites list for quickly accessing important items -- this list can be synced between all devices. There are also new browser extensions for Internet Explorer, Chrome, Firefox and Safari. At the same time 1Password can now detect password changes from the browser, allowing users to update their Login items accordingly.

1Password 4.0 for Windows also introduces support for tagging items for organizing and finding. This handy new feature is accompanied by a new Folder Name column to the All smart folder, which helps users determine which folder individual items have been filed under.

Eagle-eyed users will also spot the File > Reopen menu item, which makes it easy to switch between multiple 1Password Vaults. On a related note, 1Password is now capable of automatically detecting all password data stored in the user’s Dropbox folder.

Version 4.0 also introduces Wi-Fi sync, allowing users to sync with their iOS devices directly across the network instead of relying on a cloud connection. Users can now also share any type of item with trusted parties via email.

The update is rounded off with a Demo Vault for showing off the program’s capabilities without revealing personal information, a new toolbar where the search input is always visible and the promise of major performance improvements, particularly when searching an entire 1Password Vault. One final, undocumented, note is the dropping of support for Windows XP and Vista.