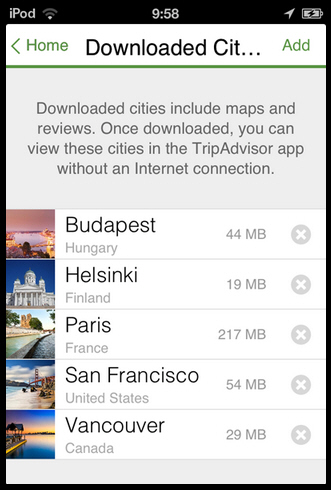 TripAdvisor LLC has unveiled a major update to its iPhone app with the release of TripAdvisor for iOS 9.0. The free travel planning app gets -- according to TripAdvisor -- it’s "biggest update ever" with the new release.

The major highlight of version 9 is offline support, but other new features include a shortcut for returning to the home screen and the ability to now find and reserve tables at restaurants.

By far the biggest new feature in TripAdvisor for iOS 9.0 is offline support. Users can now download maps, reviews and saves for over 300 cities worldwide for storage on the iPad or iPhone without requiring an internet connection.

Users can access downloaded cities (and select new ones to download) by tapping Downloaded Cities. Search for a city and you’ll see an estimated data size for the full download. Should storage become a problem, users can easily remove individual cities from here too in order to free up space.

Offline support also allows users to view their current location on maps through GPS without requiring a data plan.

Other improvements include the ability to find and reserve tables at thousands of supported restaurants worldwide. Users can now also shortcut back to the home screen by simply tapping and holding on the back button.

Also added is an option for viewing recently searched hotels via a single tap, while member profiles also show photos and badges for easier identification.

Note that the update only applies to the iPhone -- for now the iPad version remains at version 8.8, but we envisage TripAdvisor will bring this functionality to the iPad in due course. For now, TripAdvisor for iOS 9.0 is available now as a free download for iPhones and iPod touches running iOS 6.0 or later.