Watch as global cyber warfare unfolds before your eyes 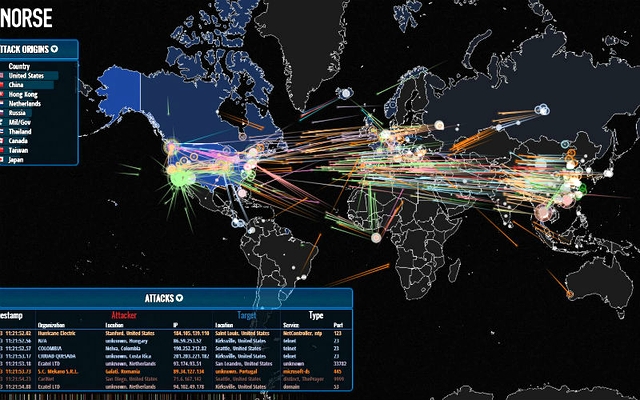 We've all heard that the scale and number of cyber attacks are constantly increasing, and that the bad guys are only getting smarter -- but can you actually picture what the unfolding exchange of cyber attacks looks like around the world?

Well now you can, with security company Norse's real-time online map of global cyber attacks. The map uses honeypot servers around the world to entice attackers into launching their attacks, and then displays them in real time on the map. The result is pretty mesmerizing, and shows the true scale of the worldwide cyber war going on all around us.

You can also see which type of hack is being used. The result is rather varied: Microsoft-DS (port 445) is still one of the top targets (it's the port used for Windows file sharing), but DNS (port 53), SSH (22), and HTTP (80) are all very popular too.

Every now and then, you'll also catch sight of a huge coordinated attack originating in China and coming down on the US like the fiery fist of an avenging God. While there's no direct evidence linking these back to the Chinese government, they do seem to happen all at once from a lot of different locations around the country -- suggesting that someone is coordinating them -- whether a cyber criminal mastermind or the Chinese government itself.

Back in 2012, the US Department of Defense reported that it was the target of 10 million cyber attacks every day; likewise, the National Nuclear Security Administration (which is in charge of the US's nuclear stockpile), says it saw 10 million attacks per day in 2012. We can only assume that these numbers have increased over the intervening years.

While the targets aren't real, the attackers on the map are, and we can suppose that the actual number of attacks going on is much higher than even the Norse map suggests. Still, this will give you some sense of just what's going on out there, and why a strong cyber security policy is a must-have in today's business world.