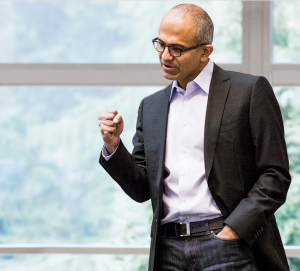 Last week Microsoft CEO Satya Nadella took another step in redefining his company for the post-Gates/Ballmer era, sending a 3100-word positioning memo to every Microsoft employee and to the world in general. I found it a fascinating document for many reasons, some of them even intended by Nadella, who still has quite a ways to go to legitimately turn Microsoft in the right direction.

We’re seeing a lot of this -- companies trying to talk their way into continued technology leadership. Well talk is cheap, and sometimes that’s the major point: it can be far easier to temporarily move customers and markets through the art of the press release than by actually embracing or -- better yet -- coming up with new ideas. We’re at that point to some extent with this Nadella message, which shows potential but no real substance. But I think this was not written for customers so much as for the very employees it is addressed to.

It suggests to me a coming cultural revolution at Microsoft.

Read his message (the link is in the first paragraph) and I’ll wait for you to come back.

Wasn’t that slick? The major impression I got from this essay was that it had been highly polished, but then just look at Nadella with his perfect shirt and jacket and jeans. Tim Cook would love to look that good. The problem with polish is that it has to be underlaid with substance and this message is not, at least not yet.

Nadella begins at the altar of innovation, a word that at Microsoft has traditionally meant stealing technology. Of course he is the company cheerleader to some extent but  Microsoft’s tradition of innovation is hard to even detect, much less celebrate or revive. This is revisionist history. Can he really believe it’s true?

He calls on Microsoft to rediscover its soul. I didn’t know Microsoft had lost its soul, though some might argue the company didn’t really have one. But if we can accept that Microsoft has in recent years started to play more fairly, is rediscovering its soul good or bad?

Nadella talks about "what only Microsoft can contribute to the world". I honestly don’t know what that means, do you?

His message is of course a repudiation of Steve Ballmer’s Devices and Services strategy and of Steve, himself, which I see as VERY important. We’ve changed coaches so to start winning again we’ll change the labels, too. Services are still in there, devices, too, but something’s different -- "mobile-first and cloud-first".

I don’t mean to be a pedant but which is it -- mobile first or cloud first? Only one thing can be first.

The gist of this is that Nadella intends to keep Microsoft important to personal and organizational productivity by emphasizing, it seems, the coordination of information in a world where users have multiple devices and there are a growing number of devices independent from any user -- the so-called Internet of things.

The obvious problem here is that for the first time in a long time Microsoft isn’t a leader in any of this. It is sometimes a strong player (and sometimes not, like in mobile) but is is not embracing what Bill Gates saw as the very essence of Microsoft -- establishing de facto standards. Windows is the top OS, but it’s pretty much ignored here. Same for Office. Xbox is a big success but it’s not the top game system and it hardly creates a de facto standard. Windows Server and .NET are solid players but not dominant in the old sense that Microsoft can threaten to pull a few APIs and destroy a developer’s world. Microsoft is just one of many companies in accounting and business intelligence.

The reality here that Nadella -- to his credit -- at least alludes to, is that the playing field is now level, the score is 0-0 (or more likely 0-0-0-0-0) and for Microsoft to win it will have to play hard, play fair, and win on its merits. And that’s what leads into the discussion of culture and how the company will do anything it must to succeed. "Nothing is off the table", Nadella wrote. This is the most important part of the message and, indeed, is probably the only part that really matters.

Microsoft has a shitload of money and thousands of good employees but it also has a corrosive management culture that tends to work against true innovation. Nadella’s biggest challenge is to change that culture. The next six months will be key. If it works, great. If it doesn’t, then there will be another CEO and another plan. Microsoft can probably afford to blow it another time or two, but that’s all. Good luck Satya. Time marches on.

What do you think Microsoft is doing?