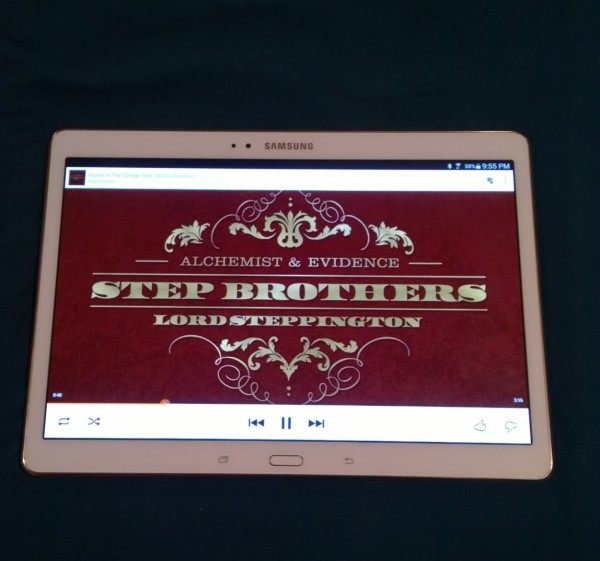 Android is a very capable operating system. With it, Google accomplished the unthinkable -- widespread Linux use by average home users. Linus Torvalds popularized his kernel with nerds and the enterprise, but the search giant made it accessible for all. Here's the thing though -- the fact that Android is powered by Linux doesn't matter. No, to the average consumer, all that matters is the experience. What lies beneath is inconsequential.

Samsung recently released the Galaxy Tab S 10.5, its newest flagship tablet. The device's closest competitor is the iPad Air -- which is a tablet I love. Besides Apple's tablet, there is really no other product to consider at the $500 price point. So, if you are considering a $500 general-use tablet, the only question that must be asked is -- is it better than the iPad Air?

Boy, what a tough question to answer -- tough, but not impossible. I've been using them both, side by side, for some time now and I have some definitive thoughts.

The first thing you notice upon taking the Tab S from the box is just how thin and light it is. Shockingly, at 6.6mm and 465 grams, it is even thinner and lighter than the iPad Air. This makes it very easy to hold and reduces arm-fatigue. Of course, at this point, we are splitting hairs -- both tablets are really thin and light.

If you are in the market for a 10 inch tablet, the screen should be a huge factor in your decision. For a while, the iPad Air display was one of the best, if not the best. The retina display, while partly marketing-speak, produced beautiful and vivid images. While the display on Apple's tablet is still great, it can no longer be called the best.

The Galaxy Tab S 10.5 offers a 2560 x 1600 resolution, but that is only part of the allure. The real news is the Super AMOLED technology, that recreates the most beautiful colors and imagery. Some may argue that this technology over-saturates the colors -- I must disagree. True, colors are more vivid, but not to the point of creating a mockery by any means. No, it instead treats the user to a more life-like experience. 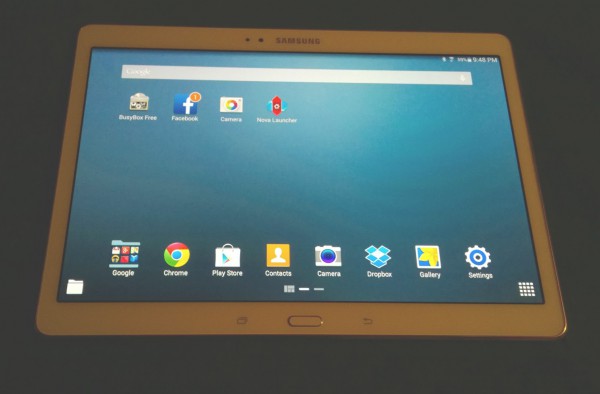 Where it really shines is in the sun (pun intended). In my backyard on a sunny day, the iPad Air is unusable. It is impossible to decipher what is on the screen, so I must head for shade. The display on the Galaxy Tab S, is a totally different story. Samsung's technologies allow the user to have a better experience under sunlight. This is achieved using sensors that adjust the display to your surroundings.

Much like its smartphones, Samsung has implemented its TouchWiz improvements to the otherwise boring Android interface. When compared to the stock experience of something like a Nexus 10, TouchWiz makes the user experience much more colorful and lively. Things get taken to a new level with this tablet though, as it takes advantage of a tablet-optimized "magazine" mode, which I rather like. Don't like it? Install Nova Launcher. It's not a big deal, guys. Android gives you the option to choose. 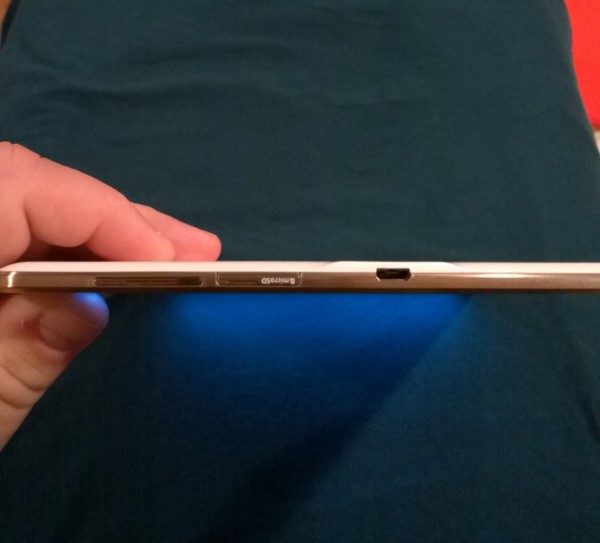 The iPad does not allow you to easily add additional memory. While you can jailbreak and access SD cards and flash drives, under normal usage that is not allowed outside of photo importing. Samsung's tablet offers a microSD slot, so you can add up to 128GB of additional storage on the cheap. While newer versions of Android are making it problematic for apps to use the card, it will work wonderfully for storing media, docs and any other file you want. 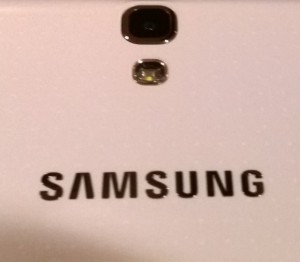 The rear camera on the Galaxy Tab S 10.5 is actually not bad. Should it become your dedicated camera? No. Still, for a tablet, it is quite capable. There is very little noise and shutter is quick. However, the front-facing camera is pretty bad. Pictures come out very grainy, but it serves its purpose as a video-chat camera for services like Hangouts and Skype.

Sound on the tablet is remarkable. While not front-facing like the class-leading Surface Pro 3, there are at least stereo speakers located on the sides, that lend to solid stereo separation. The user can actually make out right and left channels, something that can be lost when the speakers are positioned on the bottom or rear. Watching a movie on this tablet is a dream -- the combination of speakers and display make it the perfect Android-powered media tablet. 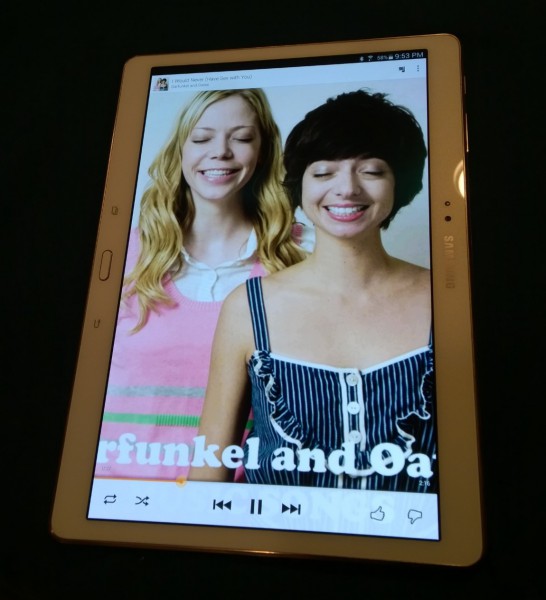 Unfortunately, and strangely, the tablet uses USB 2.0 for connectivity. I understand that many people are moving towards the cloud and connecting to a PC is becoming a rarer occurrence. However, why implement USB 3.0 on the Galaxy S5 smartphone, but not on this flagship tablet? What is good for the goose, should be good for the gander, I say. 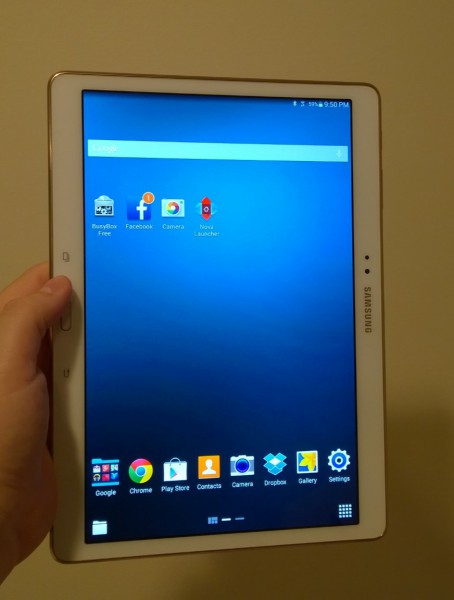 When holding the Tab S vertically, my thumb is constantly hitting these touch-sensitive buttons. It ruins the experience when doing something like reading, as you want to be immersed in the story. Very often, when I relax and get comfortable, my thumb wanders to those buttons and ruins it all. Could this just be a learning curve? Sure, maybe I can train myself not to hit those buttons, but that should not be necessary. You can see what I am talking about in the above photo.

For internet activity, it is a Wi-Fi only affair. This is fine, as I mostly use tablets in my home. If it does leave the house, I simply tether using my phone. The wireless chip in the Tab S is top-notch though, offering 802.11AC. When connecting to my Apple Airport Extreme, the 5GHz band was visible, it connected quickly and was super-fast. Nice!

The iPad Air is a class-leader in battery life, but the Tab S is no slouch. While I did have to charge it more often than the iPad with equal usage, it still outperformed any other Android tablet I have used. On average, I would say it achieved about 10 hours of use between recharges, which for my usage, meant it would be charged about every three days. It would be in standby when not in use.

My favorite aspect of the Samsung Galaxy S5 is the fingerprint reader. I am happy to say that it is equally accurate on the Tab S. However, I find it a bit awkward to use on a 10 inch tablet, when located on the middle of the bottom-horizontal bezel. I would prefer it to be located on the top right of the face, so I can easily slide my finger. This means the fingerprint reader and the button should be separated on tablets. Do I appreciate having it? Yes. Do I use it often? Yes. Is it ideally located? No. 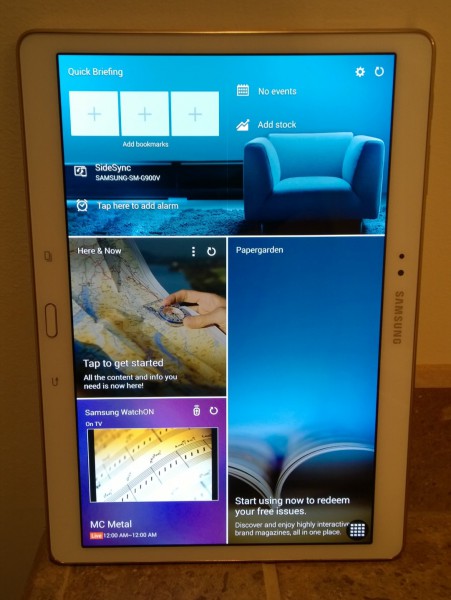 Owners of the Samsung Galaxy S5 are in for a special treat. A new feature called SideSync 3.0 allows that smartphone and the Tab S to wirelessly connect. As you would expect, you can transfer files between the two devices when connected. However, the true magic is that you can view and control the S5 screen on the tablet. This includes controlling all apps. Best of all though, you can make and receive calls on the tablet without touching the phone.

You can see an awesome example of this feature in the video below. This was taken by BetaNews at the launch event for the tablet. In my own testing, it works just as flawlessly -- amazing.

Samsung is the leading Android manufacturer for good reason -- it makes quality devices that people like. There is no mystery, or advertisement brainwashing. It is a great tablet. It is fast and fluid, full of features and of course, has the best screen of any tablet. If you want to consume media, this is the tablet to buy. If you want to play Android games on a 10 inch tablet form factor, this is the tablet to buy.

Is it better than the iPad Air? Tough call. For the money, absolutely -- you are getting much more value. Of course, people entrenched in an Apple lifestyle should probably stay there. If you covet a mindless and easy to use device, the iPad Air is probably the way to go. Please don't misconstrue -- sometimes we all want a mindless and easy to use experience. I am not knocking Apple's tablet, I do love it.

With all of that said, if I owned neither tablet and had $500, I am going with the Samsung Galaxy Tab S. The better screen, expandable memory and fingerprint reader push it over the top. Are there issues with accidental presses of the capacitive buttons on the bezel? Yes, it sometimes drives me nuts, but the benefits of the rest of the package outweigh it by far. Highly recommended.