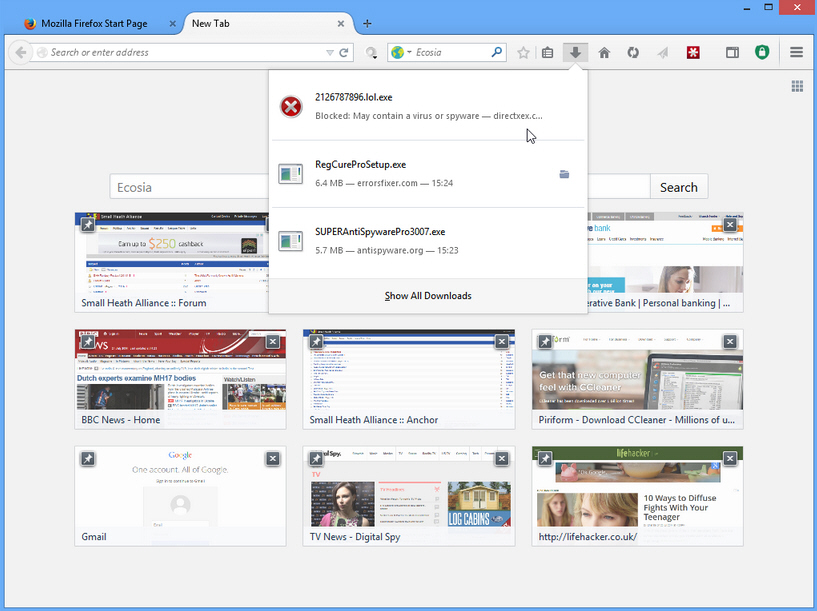 Mozilla has released Firefox 31.0 FINAL for desktop, with Firefox for Android 31.0 due to follow in the next couple of days.

After the relatively disappointing Firefox 30, version 31 adds some notable new features, including the ability to block known malware downloads as well as a new search box to the New Tab page.

Firefox 31 FINAL’s download screening tool originates from Google, which offered Mozilla its application reputation feature that detects malicious downloads. The tool, which has been part of Google Safe Browsing since 2012, did not come with any API documentation, but Mozilla has managed to figure out how most of it works.

The security measure means that any downloads -- user-initiated or otherwise -- are automatically screened for known malware or possible suspicious behavior, then blocked if necessary.

Mozilla freely admits that the feature is still in its infancy, noting that "using Google’s API, we can never do better than Chrome". Preliminary tests show it’s currently not as effective as Chrome, but should improve as the feature is picked apart and refined.

One limitation not yet circumvented is that Firefox isn’t currently capable of detecting if the download was triggered by the user or not.

The feature is switched on by default -- users can toggle this setting via the "Block reported attack sites" option under Options > Security.

The New Tab page also gains a new Search field that ties in with the default search provider selected in the main Firefox search box.

Windows users should also find that of version 31 Firefox will automatically handle PDF files and audio/video .ogg files internally unless a specific application is selected under Options > Applications.

Other changes include a new certificate verification library (mozilla:pkixl) that Mozilla promises is more robust and maintainable than previously.

Developers are spoilt for choice in version 31, with numerous new tools added, including Add-on and Canvas Debuggers, and improved (the color picker gains an Eyedropper tool).

One change in Firefox 31 FINAL is the removal of the CAPS infrastructure for specifying site-specific permissions, while a notable bug fix allows users to search for partially selected link text via the context menu.

The update, which should roll out tomorrow, will be followed by Firefox 31 for Android. This update will allow users to reorder existing panels on the about:home page, and adds support for refreshing synced tabs on demand. It also implements the Firefox Hubs API, which allows add-ons to contribute to the Firefox for Android home page.