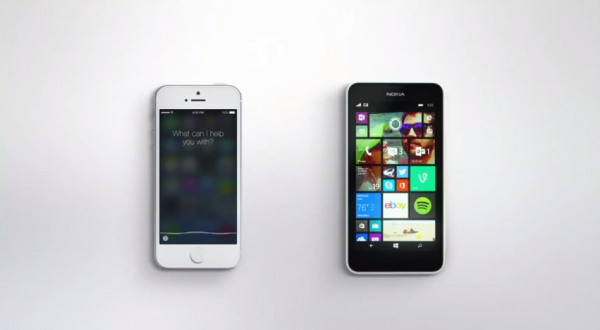 Even though Cortana shares some major design traits with Google Now, there is no denying that the new Windows Phone 8.1 personal assistant actually feels more like a Siri rival. That is due to their uncanny wittiness and human-like personality, two things that are just not there in Google's (clinical, albeit mighty powerful) offering.

Cortana is gunning for Siri as the latter is a more talked-about personal assistant than Google Now is (and will likely ever be). So it should come as no surprise that, in a new Windows Phone 8.1 ad titled Happy Anniversary, Microsoft pits the two against each-other. And, obviously, Cortana embarrasses its opponent.

Microsoft leverages some of Cortana's contextual awareness for its personal assistant to come out on top. It can remind the husband to wish his wife a happy birthday next time she calls and buy roses next time he is near any flower shop, and let him know when it is time to leave for Bold Spoon (likely a restaurant) to arrive there in time.

Siri, on the other hand, fails to do any of those things in the ad. But it ends its string of can't dos with a praise aimed at its opponent -- "Now that is a smart phone" -- after Cortana displays the said navigation information.

The clever bit in this ad, however, is that Siri loses on an expensive Apple iPhone 5s while Cortana wins on an inexpensive Windows Phone 8.1 device -- it is a Nokia Lumia 635, which goes for as little as $99 off-contract in US -- and not a comparable premium smartphone like a Nokia Lumia 930.