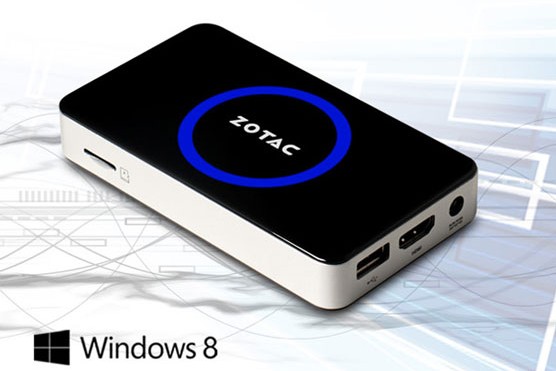 Technology is almost always shrinking. The only thing that seems to keep getting physically bigger is displays (monitors). This is the reason that smartphones are now getting huge -- people like more real estate on which to work. Before the smartphone was popularized, cell phones were getting ridiculously tiny.

Home computers have been shrinking too -- laptops keep getting thinner, and desktops keep getting smaller. However, desktops still command too much of a footprint on a desk. The tiny Raspberry Pi, when paired with Linux, showed the world what could be, but Windows machines would never achieve such size, right? Wrong. Today, Zotac unveils a Windows computer that is impossibly small -- the ZBOX PI320 pico.

"At the heart of the ZOTAC ZBOX PI320 pico is a quad-core Intel Atom processor with Intel HD Graphics technology for snappy system responsiveness and stunning high-definition video playback capabilities. The very energy-efficient processor is cooled with a fan-less heatsink that generates zero noise for an excellent silent computing experience", says Zotac.

While the form factor is tiny, the possibilities are not. This computer runs a fully-capable version of Windows, so the user is only limited by their own imagination. Hell, it should run a Linux distro like a champ too.

This can easily be someone's main computer, especially if you add a roomy USB hard drive or large micro SD card. This could make a really nice portable HTPC as well, easily going in luggage and connecting to a hotel TV by HDMI.

Unfortunately, price and availability have not been announced. However, if you need such a tiny computer, you are likely willing to wait.

The manufacturer lists the following specs:

Will you buy the ZBOX PI320 pico? Tell me in the comments