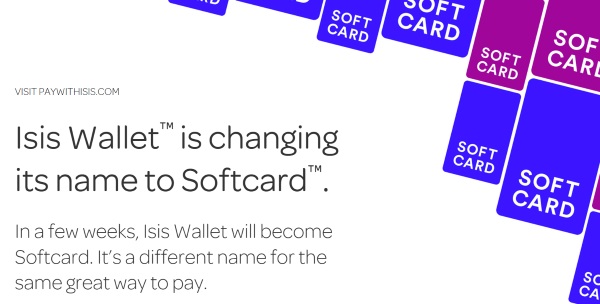 When you see the letters ISIS, what is it that you first think of? Is it the Egyptian goddess of health, marriage and love? The Institute for the Scientific Investigation of Sexuality? Or is it the Islamic State of Iraq and Syria, the jihadist group that has been in the news for some time now? It's quite common for there to be unfortunate sharings of names and acronyms, and it's something that Isis Wallet, the NFC payment service, has fallen foul of. To avoid being associated with the Middle East group, the service is being renamed to Softcard.

The rebranding has not come completely out of the blue. Back in July, company CEO Michael Abbott explained: "Recently, we have observed with growing concern a militant group whose name, when translated into English, is Islamic State of Iraq and Syria -- often referenced by the acronym ISIS. We have no interest in sharing a name with a group whose name has become synonymous with violence and our hearts go out to those who are suffering".

The continuing headline-grabbing activities of ISIS have done nothing to dissuade Abbott from the change in name. An announcement on the Isis Wallet, sorry Softcard, homepage reads:

We're changing our name to Softcard.

In a few weeks, Isis Wallet will become Softcard. It's a different name for the same great way to pay.

For now, the existing Isis Wallet website remains but it will be phased out as the new Softcard branding takes over. In fact there is already a Softcard page up and running, although there are still numerous references to the Isis-branded iOS and Android apps.