Hate U2? Apple offers a tool to remove the free Songs of Innocence album from your iTunes library 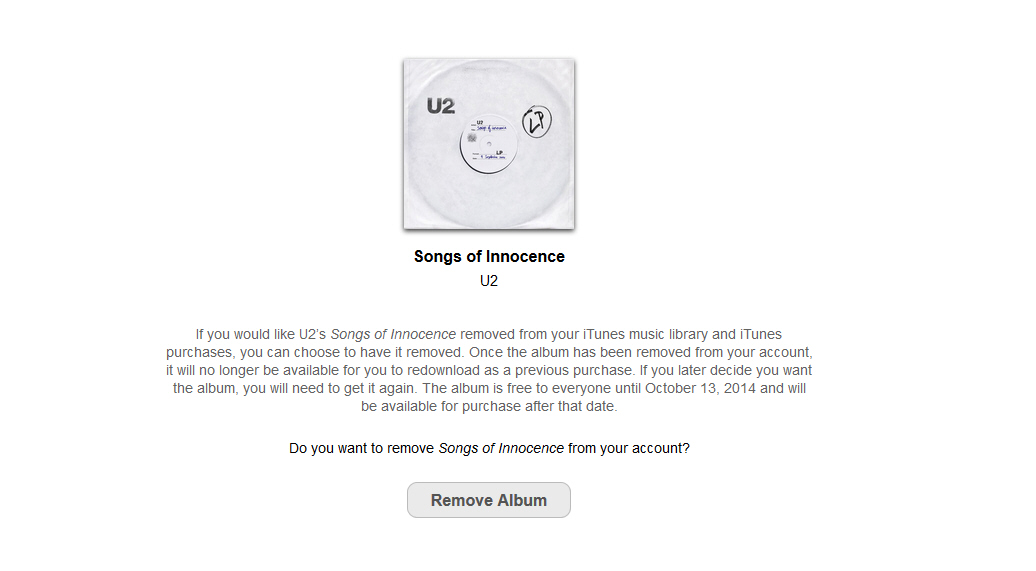 At the end of its iPhone 6/6 Plus/Apple Watch launch last week, the tech giant kindly gave everyone a gift -- a free U2 album. Songs of Innocence is the first album from the Irish band in five years, and Apple made it instantly available to all 500 million plus iTunes registered users. Which was a nice thing to do, after all who doesn’t like a free gift?

It turns out quite a few people were less than pleased to discover U2's new album appearing in their music collections whether they wanted it or not. If you’re one of those people unhappy about the presence of the album, and despite hunting for an easy way of removing it, still haven’t found what you’re looking for, don’t worry -- Apple has released a new tool for the job.

All you have to do is go to this link, hit the Remove Album button and log into your iTunes Store account. All reference to the album’s existence will vanish. If you’ve already downloaded it, you’ll need to manually delete the album from your device(s).

If you change your mind, and decide that yes, you do want the album after all, you’ll be able to download it from iTunes for free (provided you do so before October 13 2014).

Will you be using the tool to remove Songs of Innocence from your iTunes library?

19 Responses to Hate U2? Apple offers a tool to remove the free Songs of Innocence album from your iTunes library