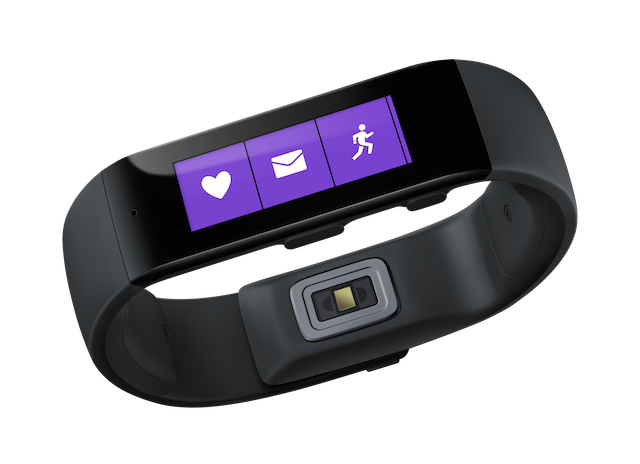 Microsoft is getting into the wearables business, but not with a smartwatch as the rumors have suggested for more than a week. The software giant is actually approaching this market with a smart activity tracker called Band, and a dedicated platform called Health.

Like the rumored smartwatch, which could have competed with Android Wear devices and Apple Watch, Band works on all three major mobile platforms, Android, iOS and Windows Phone. It is designed for both fitness junkies as well as average folks who wish to keep track of their daily activity.

Band has 10 "smart sensors" which keep track of things like the user's heart rate, calorie burn, sleep quality and the like. But those are things other activity trackers can do as well, and for significantly less money. Band actually costs $199, which makes it quite pricey. The added value, on top of what a normal band does, comes from the built-in display and smartwatch-like software features. And, of course, there are tiles on the display, which look really nice there.

Band also provides workouts tailored for the user's fitness goals. It ties in with Cortana, if the user is using a Windows Phone 8.1 device, and, using the built-in screen, delivers notifications for calls, calendars, emails, messages and social updates as well as other info like the UV index, from the built-in UV monitor (sensor).

With Cortana the user can, for instance, set a reminder or get directions. There is no integration with other personal assistants at this point, but, given that Google just introduced a NOW API, we could see Band playing nice with it (or Microsoft bringing Cortana like it is on Windows Phone to Android and iOS). Speaking of directions, Band has a built-in GPS, which can also record your routes, when walking or running.

You can use Band with any Bluetooth-enabled device running Android 4.3 Jelly Bean, iOS 7.1 and Windows Phone 8.1, or newer.

Now, let's take a look at Health. As the name of the platform suggests, it is designed to act as a collection of fitness and wellness-related data, like step counts, burned calories, heart rate and other information, from all sorts of wearable devices and related services. Microsoft says that it works with Jawbone Up, MyFitnessPal, RunKeeper and MapMyFitness, as well as Microsoft Band, with more to be added in the future. All this data will be collected and made available through Android, iOS and Windows Phone apps, which are hitting the respective app stores now.

What does Microsoft do with this information? Well, the software giant says that the user will get insights, the ability to combine data with calendar, email and location information, and much more. It's like Apple's HealthKit, if you will, as it also packs APIs for device manufacturers and services to leverage. But, it can also share data with your medical provider, through HealthVault. It will be interesting to see just how accurate the collected information is, considering the variations known to occur between different wearables.