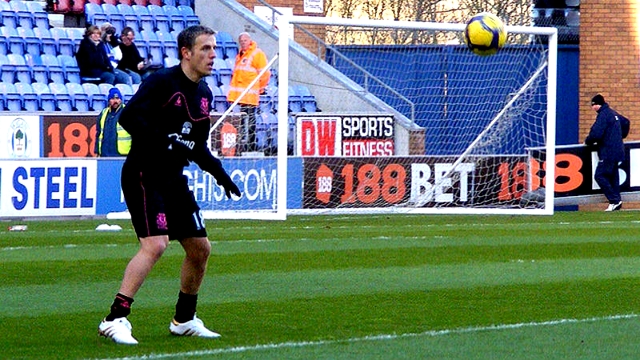 With high-tech player tracking and analysis systems gaining serious traction in the world of professional sport, data can now be used to instantly analyze player and team performance like never before.

But this hasn’t always been the case, as we found out from former Manchester United player and coach Phil Neville, who helped to shed some light on the role of big data in professional football and how it has changed throughout his career.

He started off by taking us back to Manchester United’s famous 1999 Champions League final win against Bayern Munich. As surprising as it might sound, he said that there was no data used at all back then.

The team just watched a video of one of Bayern’s previous matches, pointed out a few tactical areas that could be exploited and that was it.

Fast-forward fifteen years and things are very different. Today’s top clubs employ people specifically to analyze data collected on their own players and opposition teams and Neville went so far as to say that these days, "data analysts are almost as crucial as the manager".

Data is collected on everything: Match performance, training performance, blood tests, heart rates, sleep patterns and much more. But, as Neville rightly pointed out, "the key is knowing how to use the data".

If handled correctly, this information can be used to create individualized training programs, plan recovery and, perhaps most importantly, predict injury and illness.

There are several examples of players competing at the top level well into their 30’s (Ryan Giggs, Frank Lampard and Neville himself are prime examples) and this increased longevity is largely down to the role data analysis has played.

But it’s not only the players and coaches that are benefiting from big data. It’s also improving the fan experience, as it "helps the football world get clarity on situations", which greatly increases the appeal for spectators.

Neville finished by saying, "I can’t see a negative in this system" and, as coaches and managers continue to gain more and more insight into their players’ performances, you’ll be hard-pressed to find anyone who disagrees.