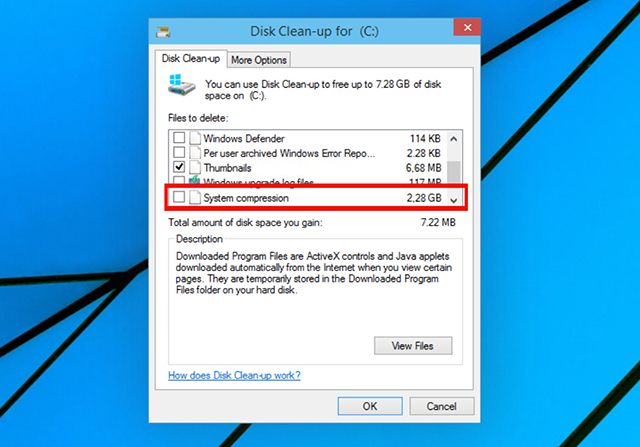 Windows 10 Technical Preview is very much an early work in progress. Microsoft is releasing new builds on a fairly regular basis (although the next one isn’t expected until the New Year), and implementing changes based on user feedback. Personally I’m liking what I’m seeing so far.

Although Microsoft discusses the major new features and changes in each build, there’s still some hidden functionality that you may not be aware of. Case in point is the little known System Compression option tucked away in Disk Cleanup.

Disk Cleanup is, of course, a feature that’s been in Windows for ages. You use it to remove junk from your computer, freeing up space. It can remove downloaded program files, temporary files, temporary Windows installation files, offline web pages, and log files, as well as empty the recycle bin and remove old thumbnails. However, in the latest Windows 10 build there’s a new feature which can compress files. This was something Microsoft used to offer in XP and removed in Vista, but now it’s back.

To try the feature, click the Start button and in the search box type "cleanmgr.exe". Right-click the option and launch it as an administrator.

Disk Cleanup will check your system and then present you with a list of things that can be removed to free up space. Scroll down and you’ll see a "System Compression" option. Although this will tell you how much space can be gained, there’s no way of knowing exactly what it’s proposing to compress. The description says simply "Compress windows binaries and program files". Helpful.

Since there’s no information about what it’s doing, you should approach this feature with care, but provided you’re not using Windows 10 as your primary OS, it’s worth having a play with it. I have yet to encounter any problems after running it.