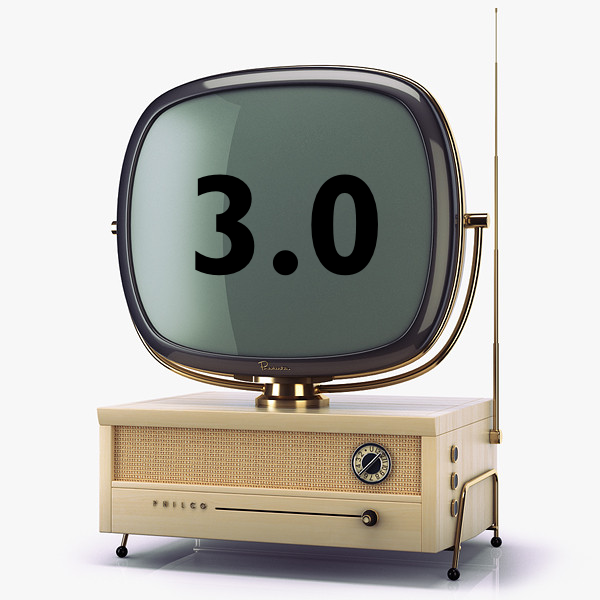 Ethernet inventor Bob Metcalfe, when I worked for him 20 years ago, taught me that we tend to over-estimate change in the short term and under-estimate it in the long term. So it can be pretty obvious what is coming but not at all obvious when. And what we know about the when of it is that making money from new technologies is often a matter of investing right before that bend upward in the hockey stick of exponential change.

We all know television is bound to enter a new era sooner or later. Heck, I’ve written dozens of columns on the subject over my 17 years in this job. But this is the first time I feel confident in saying when this TV transition will take place. It already has. Forces are already in motion that will completely transform TV over the next 24 months. Come back two years from today and it will all be different with at least a few new leaders and a few icons gone bust. Get ready for TV 3.0.

TV 1.0, starting in the 1940s, was over-the-air television. If you lived in the US there were generally three channels but that was enough to get us all to buy a TV and waste several hours per day watching it. Walter Cronkite was the God of broadcast TV.

TV 2.0 was cable, which relied on the installed base of TVs created by broadcast but expanded the programming to dozens and then hundreds of specialized channels piped in through a new terrestrial network. Cable could never have happened without broadcast happening first. Today in the US local broadcast channels still exist (now generally 5-10 per major media market) but 85 percent of us receive even local broadcast channels through a cable or satellite connection. What keeps local broadcasters broadcasting, rather than becoming just local cable channels, is the value of the radio spectrum they own, which they’ll lose if they don’t continue to use it (more on this below). TV 2.0 deepened the markets for both content and advertising by allowing, for example, more adult channels as well as very localized (and significantly cheaper) commercials. HBO and CNN were the twin Gods of cable TV.

TV 3.0 is so-called Over-the-Top (OTT) television -- streaming video services that rely on cheap Internet service. Pioneers in this field were Hulu, Netflix, and YouTube, each providing a different kind of service and using a different business model. This is continuing the trend of each TV generation building on the installed base of the one before. OTT television requires the extensive wired broadband networks built by the phone and cable companies.

There’s an irony here that cable Internet is the seed of cable TV’s own demise but it makes some sense if you look at cable TV economics, which generally has three sources of revenue: TV, telephone, and Internet. Cable TV is at best a break-even business with most subscriber revenue passed back to content providers like HBO and even local broadcast channels. Cable telephone service was a profit center for many years, undercutting local phone companies, but the rise of OTT Internet phone services like Vonage and, especially, the broad adoption of mobile phones with flat-rate long distance has taken most of the profit out of telephony for cable companies, too. That leaves Internet as the only major profit center for cable companies today. They make most of their money from Internet service because, unlike TV, it carries no content costs.

If cable companies were more pragmatic and gutsier, they’d shed their TV and phone services entirely and become strictly Internet Service Providers. Indeed, this is the generally accepted future for cable TV. That’s the what, but as always there’s that very problematic when. No cable company has been willing to take the risk of being the first to pull those plugs, because the first one or two are generally expected to fail.

So instead the cable companies have been clinging to a hope that they’ll find ways to extend more profitable aspects of their TV business model to the Internet. This is where the fight over Net Neutrality comes in. Cable and phone companies want to sell fast lane access to OTT networks, boosting cable ISP profits. OTT video providers, in turn, want to not pay such carriage fees while consumers don’t want to pay more and are also wary of anything that smacks of Internet censorship.

The Net Neutrality debate would seem to be a check on the progression of TV 3.0, but recent events suggest that the trend is only accelerating. First, the Obama Administration has finally come down hard on the side of Net Neutrality, snubbing the FCC’s current deliberations in the process. Second, there is a wildly successful FCC spectrum auction underway right now for control of radio frequency to be used for expanded wireless data services. Third, there are suddenly a lot of new OTT video services from CBS, HBO, Sony and others. These three trends suggest to me that the TV 3.0 dam is about to break and we’ll see a grand bargain cut between the parties fighting over their use of the Net.

The Administration’s demanding that Internet service be put under Title II of the Communications Act, making it a regulated service. That scares the ISPs. So does all this extra supply of wireless broadband spectrum. The cable companies are suddenly at risk of being unseated by new wireless services just the way Wi-Fi is supplanting wired Ethernet. Verizon is preparing to do this right now with technology bought from Intel. And at some point TV broadcast license holders are likely to give up their spectrum, too, for wireless Internet service, making tens of billions of dollars in the process.

My guess is that the Internet stays unregulated while still mandating open and fair access to consumers and backbone connections. With that issue out of the way, TV 3.0 can move forward. And so we have HBO, CBS and Sony leading a new class of OTT services, each trying to be early enough to benefit from the coming wave, yet late enough not to be a casualty of technology change.

In response to these new networks, rumors abound that existing OTT players are going to adapt or expand their business models to better compete in the changing market. Amazon is rumored to have an ad-supported streaming video service in the works to give the online retailer more production money to compete in what is becoming a fight between studios. Amazon denies that it is working on such a service but that doesn’t mean it won’t appear.

Netflix swears it will never show ads but I’ve spoken to two people who were being recruited to help build a Netflix ad network. While some Netflix subscribers might view pre-roll ads as a betrayal, I think it bodes well for its ability to spend on even more original programming in a very competitive market for higher-quality content and especially exclusive content such as House of Cards or Orange is the New Black. That costs money, lots of money.

All of these TV initiatives will hit the US market in 2015. If the OTT networks are successful they’ll accelerate the dissolution of cable TV into Internet-based a la carte video services that should both broaden and deepen available programming. And this is key: this transition is inevitable, and while there will be losers there will be far more winners and a generally positive impact on the US economy.