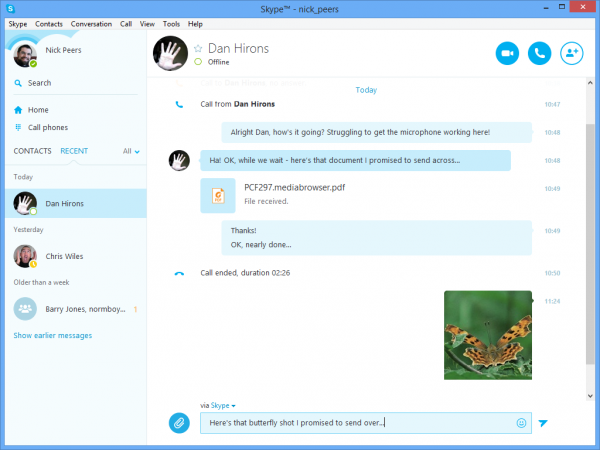 Microsoft has released Skype for Windows 7.0, unveiling a major redesign of its Skype desktop client in the process. Many of the new features debuted in a Preview pre-release that coincided with the release of Skype for Mac 7 back in October.

Version 7’s new design attempts to more closely mirror that found on mobile platforms, providing a unified experience across multiple devices. The most visible changes are the display of photos as large thumbnails inline as soon as they've been sent, plus the use of larger emoticons.

Other changes include the display of certain file type attachments -- specifically PDFs and Office documents -- using their icons to make them easier to pick out when scrolling back through a conversation.

The new version also increases the spacing between contacts and chats, and offers message previews for unread chats to make following multiple conversations simpler. Touch-screen support has also been implemented, allowing users to scroll, call and browse using their fingers.

The end result -- an app that consumes more screen real estate -- provoked a number of complaints when the Preview version was being tested, and as a result, Microsoft has added two new compact views to shrink the program down to a more manageable size.

The first allows users to shrink the Sidebar down by replacing user avatars with smaller icons indicating their online status -- access this via the View > Compact Sidebar View. Users can also reduce the size of the main chat window, but must dig deep into the Tools > Options > IM & SMS dialog to do so (tick "Compact Chat View").

The new release also allows Skype and Lync business users to contact each other directly using both audio and video, although at present the feature only works with users running Lync 2013, and has not yet been rolled out to other Skype platforms.

Version 7 also introduces a new dual-paned view that allows users to continue using the IM feature while engaged in a voice or video call, making it easier to share photos and other files during the call.

Finally, the group video chat feature -- recently made available for free to all Skype users -- has also been redesigned to make it easier to use.