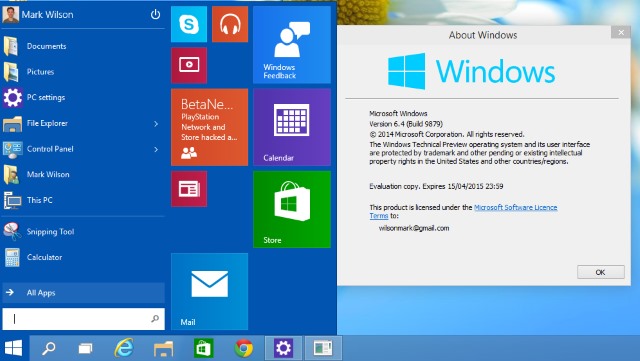 There are positives and negatives to being a tester of early versions of Windows. On one hand it means being able to try out new features before they are officially released, but on the other it means putting up with a variety of problems. Preview builds of Windows used to be all but unheard of, but now anyone can get their hands on early bits to get a taste of things to come.

The preview program for Windows 10 has been slightly different to the way things worked in previous early versions of Windows. This time around it is even possible to upgrade to new builds without the need to reinstall from scratch, and it's looking as though it will also be possible to upgrade to the RTM version when it is released next year.

By the time the finalized version of Windows 10 is released, many Windows Insiders and leak downloaders will have been using the operating system for around a year. Having spent the time getting everything set up to your liking, you may already be dreading the day you need to wipe your hard drive and reinstall from scratch. Well, worry no more -- this time, things are going to be different.

In a Twitter post, Microsoft's Gabriel Aul explained that the intention is to let Windows Insiders upgrade directly to the RTM release when the time comes:

Some people may still opt for a clean install, but it looks as though it may not be a requirement.