View, save and restore a drive's MBR/ boot sector with HDHacker 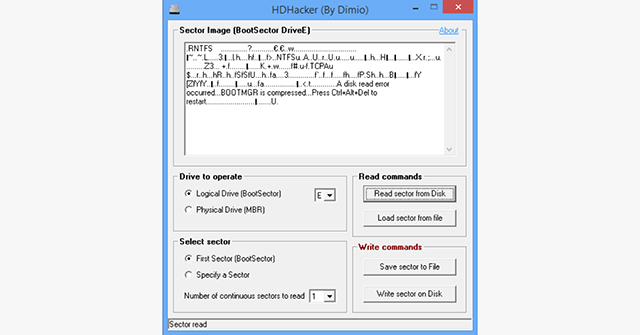 Before a PC can access a drive, it must first read various disk structures: the boot sector, master boot record (MBR), partition table, and so on. Normally you don’t have to care about any of that, but if these structures are corrupted, and the drive becomes unreadable, then you might want to know more.

HDHacker is a tiny tool which can read, display, save and restore a drive’s master boot record, boot sector, or just a defined number of continuous sectors. This is potentially very dangerous -- choosing the wrong drive or sectors could trash your system -- but it can sometimes be helpful.

The program is extremely portable, a single 112KB which runs on anything from Windows NT up. We suspect you’ll struggle to find a system that old, but at least you know it doesn’t depend on .NET, Java or anything else.

Launch HDHacker and you must first select your preferred drive -- logical, physical, fixed or removable -- from a list.

The next step is to choose a starting sector (#1 for the boot) and the number of sectors to read (1-16).

Click "Read sector…" and HDHacker reads and displays your chosen sectors. Most of this will be meaningless binary garbage, but there may also be useful information. if the boot sector starts with ".RNTFS" then you’ll know this is an NTFS drive, for example, while FAT disks should have FAT16 or FAT32 somewhere on the first line.

There are also options to save your sectors to a file, reload them later, and write them to disk. This enables you to back up these structures and restore them later, although of course if your system drive has been corrupted then you probably won’t be able to boot Windows to run HDHacker. You’ll also need to be extremely careful, as a mistake here could make a drive unreadable.

HDHacker isn’t going to be anyone’s ideal choice of backup or disaster recovery tool, and something like Free Hex Editor Neo has far more raw disk viewing power. Still, the program’s compact size, ease of use, and ability to run almost anywhere are notable plus points. If you regularly troubleshoot other people’s PCs, and don’t have anything similar, then it’s worth keeping a copy around.