Intel's Compute Stick is a Windows 8.1 PC on an HDMI dongle 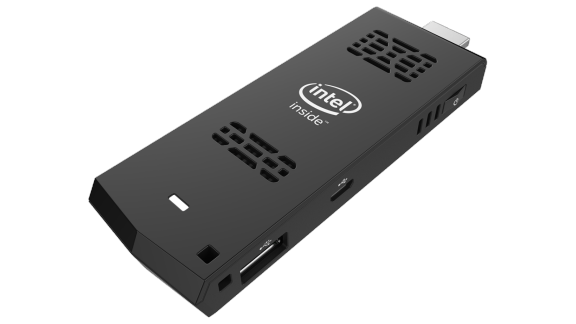 The Enterprise edition of Windows 8.1 has a feature called Windows To Go, which lets you build a portable version of the operating system that you can run directly from a USB flash drive. It works well enough but you need a super-fast (and therefore expensive) USB 3.0 stick to get decent performance.

Intel has come up with an alternative solution that can turn any HDMI display into a fully functioning computer running Windows 8.1 with Bing, or Ubuntu Linux.

The Compute Stick is a 4 inch HDMI dongle, with the operating system pre-installed. It features a quad-core Atom processor (Intel hasn't revealed the type, but it's thought to be a Bay Trail Z3735F), 2GB of RAM, built-in wireless connectivity (802.11b/g/n and Bluetooth) and 32GB on-board storage. There's also a micro SD card slot if you need more space, and a USB port to connect devices. It has a micro USB port too, but this is just for power.

Intel plans to retail the Windows version of the stick for $149. If you prefer Ubuntu, that version will cost you $89, but offers reduced RAM (1GB) and storage (8GB).

Intel says the Compute Stick is "everything you love about your desktop computer in a device that fits in the palm of your hand". That's pushing it a bit, but it certainly looks interesting.

The dongle isn’t available yet -- Intel is aiming for a March release -- but you'll be able to get additional information from here in due course.

What do you think about the Compute Stick? Is it something you'd be likely to buy?

20 Responses to Intel's Compute Stick is a Windows 8.1 PC on an HDMI dongle