Audi's in-car tablet is a thing of beauty 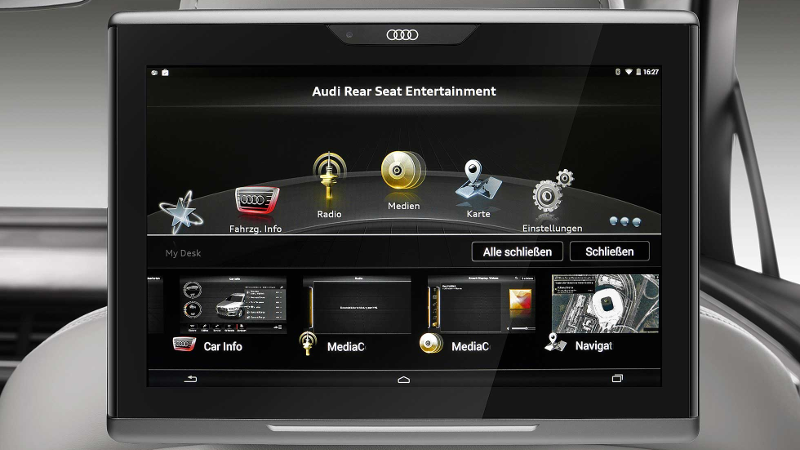 Audi has become the first automotive firm to launch its own brand in-car tablet computer, as revealed at this year’s Consumer Electronics Show.

The German company will offer the device alongside its new Q7 car, in the hope that it will provide a more fulfilling rear seat entertainment service.

The Audi Tablet boasts a premium metal finish, a 10.1-inch display and runs on Google’s Android operating system. The manufacturers have also ensured that the device is specially equipped for in-car use, ensuring that the screen is reflection-free and remains visible even in direct sunlight.

It will also become the first table to utilize the automotive-grade Nvidia Tegra 4 chip, which guarantees better performance during extremes of temperature -- much needed on those frosty winter mornings.

The tablet will provide practical functions like in-car climate control, alongside entertainment services and will also be capable of connecting to the car’s Wi-Fi. While Audi has explained that the device will work outside of the car too, it is recommended for in-vehicle use. As such, the tablet will lock itself if not returned to the car’s docking station, located within the front head restraints, within a month.

A spokesman for the car giant said that Audi wanted to modernize in-car entertainment and the launch of its own tablet seemed like the obvious choice.

"It’s a more modern and stylish form of control -- and by designing the tablet ourselves, we’ve been able to give it a suitably premium finish while also tailoring it for in-car usage".

During the Las Vegas event, Audi also confirmed that user safety was a key concern during the tablet’s development. Accordingly, the device has been constructed using a special form of glass designed to not shatter if impacted during a crash.