And so it begins -- Anonymous launches attacks on Jihadist websites 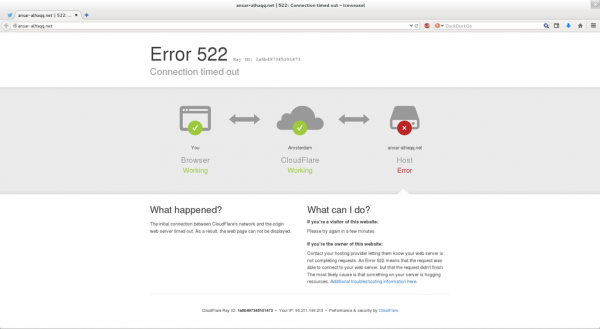 The other day I wrote about hacker collective Anonymous, covering its war on Lizard Squad and its vow to now go after terrorists. This isn't the slippery slope that some may think it is. The group isn't attacking Islam, it is targeting the extremists responsible for the murders of people. That clarification makes it hard to not be behind them. After all, entire governments have been doing this in a less technological way.

Those promised threats are now no longer just promises. Anonymous has taken down its first target -- ansar-alhaqq.net (we aren't linking to them), rendering the site, which was deemed a terrorist hive back in 2013, completely inaccessible. Reaching the site is now impossible as the DDoS (Distributed Denial of Service) targeting of it is well underway.

To complement this initiative the group has launched a new Twitter account, named for the recent shootings in Paris. The account has already racked up more than 47,000 followers and Anonymous is keeping it updated regularly, touting the progress of its attacks and even asking for the help of others in its search for targets.

A recent posting asks readers to help in the tracking down of terrorists' social media accounts. Let the group know so that it can be added to the list. It also posted a clear statement that "Islam is not terrorism", and warns "Extremists, Expect Us".

Anonymous also has issued an English version of its original video declaration, which had initially been posted in French. You can watch that below.

This is certainly not the last we will be hearing of this new crusade. In fact, it's really just the beginning. Those responsible for atrocities have angered a very capable enemy.