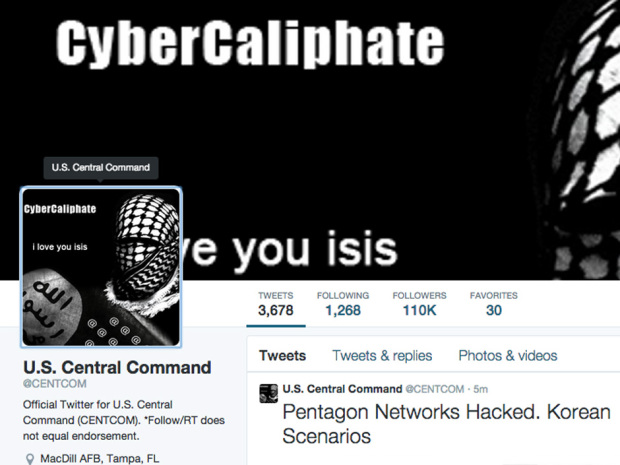 US Central Command's Twitter account appears to have been hacked by CyberCaliphate, a hacker group claiming association with ISIS.

Other military documents also appeared on the Centcom Twitter feed. These contained names and phone numbers of military personnel, and were posted under the message "We won’t stop! We know everything about you, your wives and children". Although it appears at least some of the shared files were already in the public domain.

WE ARE COMING, WATCH YOUR BACK. ISIS. #CyberCaliphate

In the name of Allah, the Most Gracious, the Most Merciful, the CyberCaliphate under the auspices of ISIS continues its CyberJihad. While the US and its satellites kill our brothers in Syria, Iraq and Afghanistan we broke into your networks and personal devices and know everything about you.

You'll see no mercy infidels. ISIS is already here, we are in your PCs, in each military base. With Allah's permission we are in CENTCOM now.

We won't stop! We know everything about you, your wives and children.

Here's a part of confidential data from your mobile devices:

There is no God but Allah and Muhammad is his Prophet! There is no law but Sharia!

US  Central Command confirmed the hack, saying in a statement: "We can confirm that the CENTCOM Twitter and YouTube accounts were compromised earlier today. We are taking appropriate measures to address the matter".

The hack occurred as President Barack Obama was finishing a major speech on cybersecurity. The timing is unlikely to be coincidental, and designed to cause maximum embarrassment.