SONICable promises to charge your iPhone, iPad or Android device twice as fast 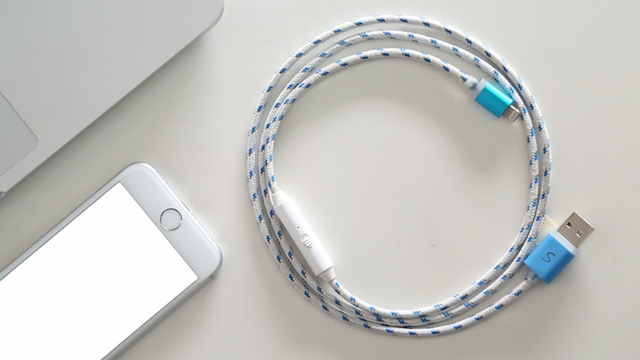 To compensate for that bigger, higher-resolution screen, faster processor and other power-hungry components, manufacturers put larger batteries inside our smartphones and tablets. Batteries have evolved very little over the past couple of years, so increasing their size feels like a logical thing to do. After all, who wants a big and fast device that lasts only a couple of hours with light usage? It would be terrible.

However, having a bigger battery also means longer charging times, excruciatingly long if you charge your device using a PC. So what can you do about it? Well, you can get SONICable, a new charging cable which promises to charge your iPhone, iPad or Android device twice as fast.

What does SONICable do to charge your device faster? Well, here's the basic explanation. The cable that charges your device is designed to allow you to charge the battery and synchronize data, the latter of which takes away some power.

Ideally, you should be able to choose whether you want to also be able to sync data during charging, but, unless you have a rooted Android device and a kernel that supports it, it is virtually impossible to disable it. SONICable, through a switch, allows you to do just that. You can select whether you want to charge and sync data or just charge the battery.

Charging is excruciatingly slow as PC USB ports are generally limited to 500 mA. Because of this, it takes many, many hours to fully charge a tablet or a smartphone with a relatively large battery. Those who own iPads surely know what I mean. (In comparison, a no-frills wall charger can deliver 1 A, which severely reduces charge times).

SONICable looks to be quite durable as well, and easier to use than a normal cable as the full-size USB end can be plugged in both ways in a charger or USB slot. It is not a USB 3.1 Type-C connector, but a normal one that is designed to work as such. It also comes with a lifetime warranty and is Apple MFI-certified.

SONICable is not available right away, as the company behind it is currently crowdfunding the cable through Indiegogo -- it has already raised $86,942, with a funding goal of just $10,000. However, it is said to ship in March. Right now, you can get one for $27, but, after the crowdfunding campaign ends, the price will go up to $36.

2 Responses to SONICable promises to charge your iPhone, iPad or Android device twice as fast