The Windows 10 presentation gets an A -- for Apple 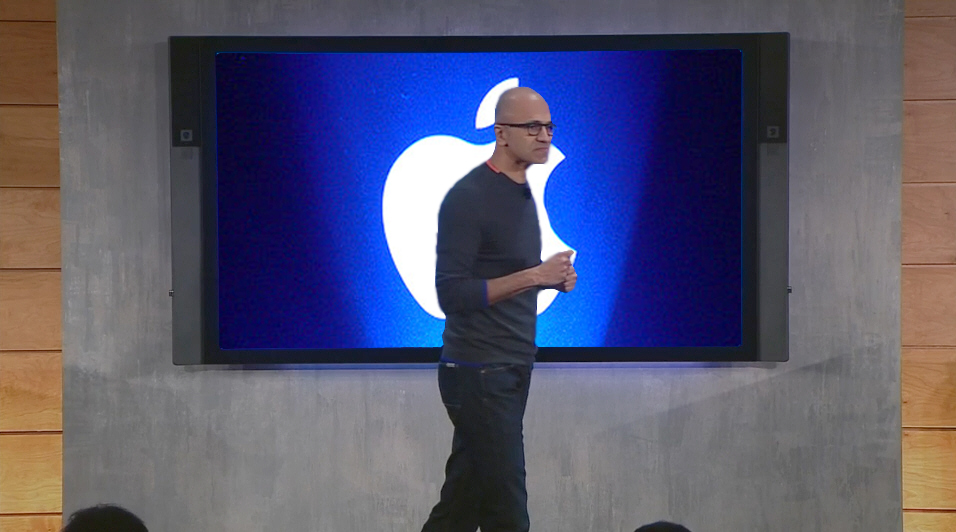 Yesterday’s Windows 10 briefing was weird. I mean that in a good way. Microsoft went all Apple on us, aping much of the style and presentation of its rival, right down to the "one more thing" which turned out to be a crazy holographic nerd helmet that was nowhere near finished and can’t yet do most of the things claimed for it. But has potential.

In the aftermath of the presentation tech writers began asking questions like "When did Apple become the boring one?", and that would have raised a smile or two at Redmond. Microsoft needed to shake off its reputation of a firm which makes dull, or flawed "me too" products, and for the main I think it succeeded.

The company seems to be trying to transition into a firm you can like. "The People’s Apple" if you will. The old Apple trick of repeating a word -- "love" in Microsoft’s case yesterday ("we want you to love Windows 10", "we want people to move from needing Windows, to choosing Windows, to loving Windows") -- to drum it into the minds of those in attendance or viewing online, was handled well, and with a subtlety I liked.

It wasn’t a perfect presentation though. At two and a half hours it dragged on, with occasional periods of boredom interrupted by annoying long periods of buffering.

The gathered audience -- writers hunched over screens -- clearly hadn’t been whipped up into a frenzy as the excitement you feel from an Apple event wasn’t noticeable here.

When Terry Myerson revealed Windows 10 would be a free upgrade to users of Windows 8.1, the room was totally silent, and stayed silent when he added Windows Phone 8.1 to the list (the only sound was a solitary comedy cough). He then played the trump card and announced Windows 7 customers would also be getting a free upgrade only to be greeted with more silence, followed, finally, by some sporadic clapping and a lone whistle. It was like watching a comedian dying on stage.

Similarly, when Satya Nadella was announced, there was some polite clapping and that was it. This is the frigging CEO of Microsoft. Give him a rockstar welcome! Except… you can see where they were coming from. Steve Ballmer would have bounded on stage, and torn the roof off. Satya Nadella did his best to drain the energy from the room.

Satya’s doing a great job of turning Microsoft around, and he’s given the company a modernity, drive and strategy that has been missing for a long time. But he’s not exactly a front man.

When it was his turn on stage he gave a long, meandering speech in which he spoke a lot of words, but said very little of substance. He waffled, and he rambled, and used buzzwords and phrases but if Microsoft had cut out his appearance on stage ("Sorry, Satya, we’re out of time"), we would have been none the worse off.

Satya Nadella is no Steve Jobs, he’s not even a Tim Cook, but so what? Failing to inspire on stage doesn’t matter if you can inspire in the work place, which -- with the aid of a team of good people -- he seems to be able to. I just wish he would come up with a better slogan. “Mobile first, cloud first” is rubbish. So what are you saying? It’s a draw? They’re both equally important? There are no winners? I don’t get it.

Satya Nadella is never going to be exciting, but Microsoft’s future products could be.

The holographic nerd helmet took up a big chunk of the running time, and some people have described it as Microsoft’s iPhone moment. But it isn’t. The device is nowhere near finished, and you won’t be able to buy it this year, or maybe even next, despite what you may be fooled into believing.

Microsoft was keen to stress it had been working on the HoloLens for years and years, "hidden in plain sight" in the visitors center, to avoid the accusation it had thrown together a quick prototype, which is what the demo version looked like. I’d love to know how much development time was actually spent on it across the years. I expect not much in the beginning. I would also have loved to see Steve Ballmer dancing around with it on his head, but sadly that’s not to be.

Overall though, I enjoyed the Microsoft presentation. It followed the Apple playbook closely -- start with big numbers, give the audience what they’re expecting, and something impressive as a bonus ("Windows 10 will be free!") and then finish with an innovation. Apple showed off the Watch, which isn’t ready, and Microsoft gave us the HoloLens, which isn’t ready.

I said before Windows 8 launched that Microsoft wants to be Apple, and yesterday that seemed truer than ever. There are exciting times ahead for Microsoft, it no doubt has exciting news, and exiting products to communicate, but it still needs to learn the big Apple trick Steve Jobs was the master of -- making great products seem even more exciting and desirable than they are.