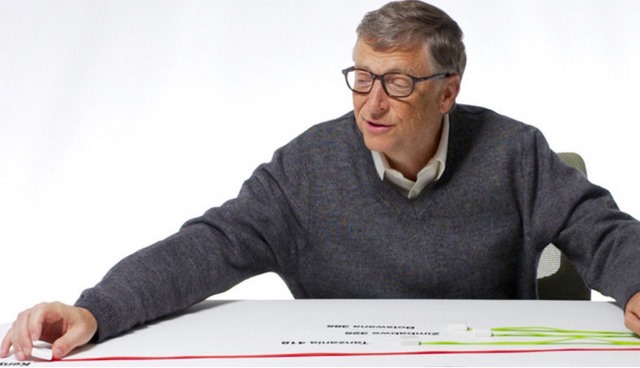 Bill Gates is more readily associated with philanthropy than technology these days, but that’s not to say he doesn’t still have more than a passing interest in the world of tech. In their annual letter, Bill and Melinda Gates look 15 years into the future, envisioning a world in which the life in poor countries has improved dramatically.

Technological advancements are key to this vision, and the Gates refer to the importance of mobile banking, cheaper tablets and smartphones, as well as improvements to crops and vaccines. It's 15 years since the Bill & Melinda Gates Foundation was created, and the couple are making a bet that "the lives of people in poor countries will improve faster in the next 15 years than at any other time in history".

The letter makes some interesting predictions about how the next few years are going to pan out, including the suggestion that "better software will revolutionize learning". The fight to get the whole world online continues, and the Gates' envision a world in which everyone has the ability to take online courses to better themselves and improve their lot. It is hoped that funding will help to improve literacy levels, and this is something that will be driven by the availability of cheaper smartphones and tablets.

We think the next 15 years will see major breakthroughs for most people in poor countries. They will be living longer and in better health. They will have unprecedented opportunities to get an education, eat nutritious food, and benefit from mobile banking. These breakthroughs will be driven by innovation in technology — ranging from new vaccines and hardier crops to much cheaper smartphones and tablets — and by innovations that help deliver those things to more people.

But the future also relies on finance. The Gates Foundation stresses the importance of mobile banking to the developing world. It might seem odd to say that the future of poor countries relies partly on citizens' access to mobile banking, but the Gates' letter says that it will enable people to store money more efficiently -- traditional banking is simply too expensive.

This is Bill and Melinda's vision for the future, and it's worth taking a look at the letter in its entirety, as it's an inspiring piece of writing.