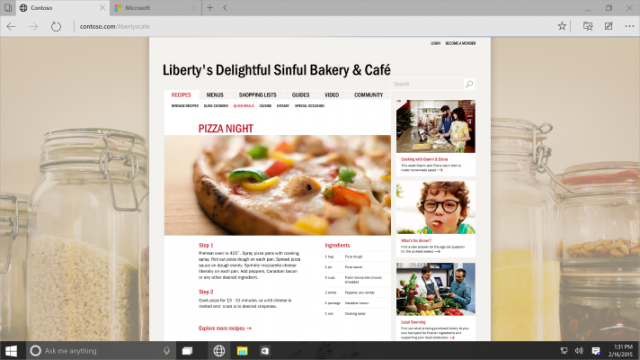 Microsoft revealed earlier this week that Windows 10 will ship with a new browser, known as Spartan. The venerable Internet Explorer will still be around for enterprise duty and certain sites, but the new kid on the block is the one Microsoft wants you to embrace. However, when it is Google's Chrome or Mozilla's Firefox that you have to leave behind, convincing you to jump ship is not going to be easy.

Spartan is clearly no Internet Explorer. It is designed from the ground up as a modern browser, that works well across multiple form factors. It will be found on all PCs, smartphones and tablets that ship with or are upgraded to Windows 10, which means that it, at least, will be readily available to test. But does it have what it takes to pass the test, and become your new favorite browser?

It's a question for which I am sure there is no universal answer. Those of you who are going all-in with Windows 10, using it on your PCs, smartphones and tablets, will most likely see Spartan as an obvious choice, in no small part because there is no Chrome, Firefox or Opera yet available in Store.

The lack of alternatives is certainly a negative, but as long as it offers all the right features it will not matter as much. At the same time, even though Microsoft says that it wants you to want to use Spartan, it will still be fine with you needing to use it.

It does look great though, inside-out, on all form factors it supports. Based on what I'm seeing, I think its interface looks fantastic. It is clean and modern, which will surely translate into a pleasing experience. It will also feel familiar, consistent across all form factors, which is more than one can say today about Internet Explorer on Windows 8.1 and Windows Phone 8.1.

Microsoft says that Spartan can be considered a Windows 10 service, in the sense that it will be kept updated, presumably more frequently than Internet Explorer. As rivals add new features quite often, this will ensure that Spartan, at least, keeps up with the rest of the pack. Of course, there are lots of other features, and changes you can expect as Spartan's development continues.

On the other hand, those of you who are not going all-in may have trouble seeing any benefit in switching to Spartan. After all, the biggest unknown is cross-platform support. With the temporary exception of iOS, Firefox is available on pretty much any platform that matters today. Chrome is even better in this regard, as it also works fine on iOS right now. So why switch?

In this day and age, operating systems are just starting points, for using the apps that we want and doing the things that we want. And browsers are more than individual pieces of code, which have to work well in a single medium.

Today, a good browser is available on more than one platform, it's available where you need it to be. It doesn't just let you view web pages, it also handles all sorts of personal information too and from the devices that you use.

The history on your PC is also on your smartphone and tablet. If you want to quickly access a site, from your smartphone, with an address difficult to remember, you can just find it in the recent history from your tablet. It's terribly convenient.

Your account credentials are with you no matter which device you are using. Type in your username and password once, and you will not have to do so again on your other devices. When there are dozens or hundreds of accounts to manage, having this option makes everything so easy.

Sync, combined with cross-platform support, is the killer feature. And Spartan can clearly sync. But, at least for the moment, Microsoft is keeping quiet about its cross-platform prowess, most probably until it can get a clear picture on where users want it the most.

Windows is a priority, no doubt, but I think Microsoft would be foolish not to release it on all major platforms simultaneously. The silly-titled "mobile first, cloud first" mantra (seriously, it's a terrible choice of words) kinda imposes it. Spartan could use Microsoft's cloud for sync, while working on others' mobiles.

As Microsoft releases more information on Spartan we will get a clearer picture of the direction it has set for the new browser. For the moment, it is shaping up to be an obvious choice in an all-Windows 10 environment, but important questions remain unanswered as to the benefits it offers for those who aren't embracing the Microsoft lifestyle all the way. Hopefully, Microsoft sees that computing is not all about Windows, and that for success in the browser it has to be present where the users are.