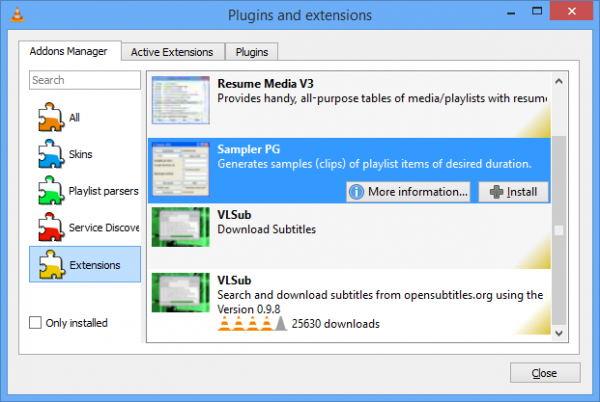 VideoLAN has announced the release of VLC Media Player 2.2.0 (and64-bit) for the desktop, along with coordinated releases for iOS, Android, and the first public betas for Android TV, WinRT and Windows Phone.

The desktop build now features a built-in extension manager. No need for manual tweaking any more, just click Tools > Plugins and Extensions, browse and install whatever you need.

Open a video or audio file you were playing earlier and the program now asks if you’d like to resume where you left off, a much-requested feature which the mobile builds have had for a while.

There's also improved compatibility for a range of formats, in particular via support for Digital Cinema Package and various UltraHD video codecs.

We tried installing the update over our existing VLC, and found the program didn’t work as expected. We weren't asked if we'd like to resume playback when opening files, and the Extension Manager didn’t find or display any add-ons at all.

Maybe this was just some quirk of our test system, but if something similar happens to you, try uninstalling your existing build and install VLC Media Player 2.2.0 (and 64-bit) from scratch. That resolved the problems for us, and the new features then all worked without issue.