Sorry Apple, Surface Pro 3 is better than your new MacBook -- here are 6 reasons why 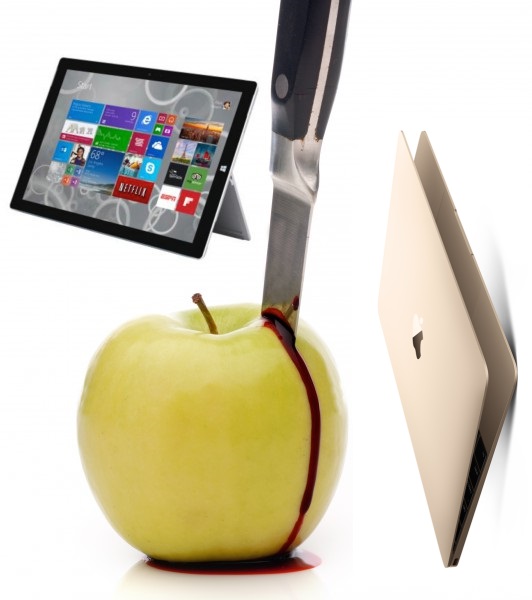 Apple makes extremely good computers; Mac Mini, iMac, MacBooks, Mac Pro -- you can't go wrong. With Apple's hardware, however, you have to pay to play; it is not an inexpensive experience. You know what? That's OK. Things are worth what people are willing to pay for them, and people are buying computers running OS X.

Today, while watching Apple's latest event, I started to fall in love with the "new MacBook", but quickly snapped back to reality; my Surface Pro 3 is better than this thing. Apple's latest laptop is arguably more attractive, but Microsoft's can do more, while offering a better experience.

1. Touch Screen -- The Surface Pro 3 is a friggin' tablet with a touchscreen. For many people, this is enough to make Microsoft's computer better. Come on Apple, it is 2015; people like this touch thing, it is not a gimmick. Could a touchscreen MacBook cannibalize iPads like the iPhone 6 Plus? It might hurt your tablet sales a bit, but regardless, OS X users deserve a modern experience. The fact that a Surface user can remove the keyboard and relax on the couch with a tablet is something your fans would love. Even if you don't make the screen removable, the ability to touch has its moments.

2. Stylus/Pen -- Not everyone uses a stylus or pen, but there is no downside to having it. Believe it or not, some people like to use handwriting when taking notes or working in a standing position. You know who else uses a pen? Artists. You know what brand many artists love? Apple. A capacitive stylus on an iPad is not ideal for pros; a digitizer is a must.

3. Windows -- This is partly subjective, but a fair point nonetheless; Windows is more popular than OS X, especially for business. Even if you prefer OS X, Windows has more available software, and that is an undeniable fact. For many college students and small business users, Windows makes more sense for this reason. Encountering software that requires Windows or Internet Explorer is a fact of life and a potential road block. Not to mention, OS X still cannot do simple things like window-snapping -- lame!

5. Better trackpad -- The Surface Pro 3 sells without the keyboard cover, but in reality it is a required purchase for the computer. While the trackpad isn't the best, it is already better than Apple's new variant. You see, because of the thin nature of the new MacBook, the trackpad no longer clicks. Instead, it uses pressure detection to register clicks and other gestures. The problem? The human brain likes physical feedback. The click of a trackpad or buttons reassure that a click has been registered. While I am sure Apple's haptic-feedback solution will be passable, it will likely be a frustrating productivity killer compared to a traditional click. Surface Pro 3 retains the clickable touchpad that consumers want.

Where new MacBook is better

Of course, the new MacBook is better in a few departments; it is not a one-sided affair. Most importantly, Apple's new laptop features a newer Intel Broadwell chipset, which allows it to be fanless. By comparison, Surface Pro 3 uses the older Haswell and as a result, an audible fan.

The traditional clam shell design of the new MacBook will allow better lap-typing. The Surface Pro 3 works better than the previous generations in this regard, but is still a frustrating experience to say the least.

While the Surface Pro 3 is thinner than the new MacBook, that is without the keyboard cover. Once that cover is added, Apple's computer is thinner, making it the more svelte of the two.

Overall, Surface Pro 3 is the smarter buy for many people and the overall better computer. Hell, it is arguably half the starting price. With that said, die-hard OS X fans will likely stay in Apple's camp, and that is not a bad thing. Look, if you like Mac computers and they meet your needs, then the new MacBook is likely a great choice. If you want a touch screen computer that is also a tablet and, most importantly, runs the desktop operating system with the most software, Surface Pro 3 is for you.

Keep in mind, however, the Surface Pro 3 is last year's model; a 2015 Surface Pro 4 refresh with Broadwell would make Microsoft's win over Apple even greater.

174 Responses to Sorry Apple, Surface Pro 3 is better than your new MacBook -- here are 6 reasons why